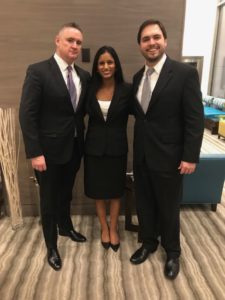 They were crowned regional champions in the Manhattan Regional, which consisted of schools such as Cornell Law School, Georgetown Law, Texas A&M University School of Law and the University of California, Los Angeles.

Biedrzycki was also recognized for crafting the second best brief at the Manhattan Regional.

The team’s performance qualified St. Mary’s for the national finals in Washington, D.C., which will be held from April 5 to 7.

“Successes like this are a constant reminder of the extremely high caliber of law students we have at St. Mary’s and I am very lucky to have this opportunity to coach them,” said Head Coach Ricky J. Poole (J.D. ’90).

The ABA NAAC is the largest moot court tournament in the United States, with about 200 law schools competing to make it to D.C. every year.

The National Alternative Dispute Resolution Team also returned home victorious after competing in the ABA’s National Mediation Regional Competition in Miami for the first time. Not only were two of the top four spots taken by St. Mary’s, but both teams then proceeded to sweep the tournament.

One judge commented that St. Mary’s performance in this competition was “near perfect.”

Head Coach Emily Landon said she was elated at the comments the teams received during the competition.

Both teams will be competing in the ABA Mediation Finals in D.C. in April.