“A pyramid of numbers can be represented as a matrix a of n rows, where the ith row has elements only on the first i columns. In addition, ai,j = ai+I,j + ai+I,j+I, for the first n – 1 rows. For the bottom row this doesn’t apply, those numbers can be any strictly positive integers. Given an integer s, count the number of pyramids where a1,1 = s, for all possible values of n.” 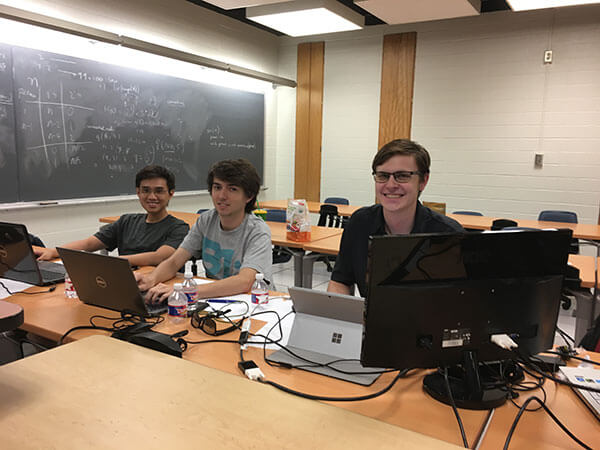 The trio teamed up to compete in the annual IEEEXtreme Programming Competition on Oct. 13 and 14 against 8,000 participants among 3,350 teams worldwide.

The students entered Richter Math-Engineering Center, Room 102, at 7 p.m. on Friday evening and didn’t emerge until 7 p.m. Saturday, after putting on a world-class performance.

“Problems were released every hour, so we had to solve them intermittently,” Huynh said. “We had to strategically approach them, either solving them individually or as a group to get the maximum number of points.”

The Engineering trio finished No. 26 among 207 teams from the U.S. — and ranked among the top 11 percent in the world.

“Overall, it was a very intense competition,” said Professor of Computer Engineering Wenbin Luo, Ph.D., who was the St. Mary’s team’s proctor. “Our team had limited time to prepare and practice in addition to their busy schedules. I am extremely proud of our students.”

Luo, who is an Institute of Electrical and Electronics Engineers (IEEE) member, spent this summer in Silicon Valley visiting the campuses of Facebook, Google and Microsoft, and was inspired to provide St. Mary’s students with avenues to showcase their programming skills upon his return.

“The IEEEXtreme Programming Competition seemed like such a good opportunity for our students to put their programming skills to the test,” Luo said. “Now, because of our students’ recent accomplishment, I think our reputation will spread and help others realize that St. Mary’s has very strong Engineering programs.”