St. Mary’s University has a legacy of producing world-class medical professionals. Excellent academics and personal relationships are the key.

St. Mary’s University-educated men and women in the health professions have an impact felt far and wide. Examples abound, from Paul Saenz, D.O. (B.A. ’79), the San Antonio Spurs’ team physician who has kept players healthy on the way to five NBA titles, to Sylvia Villarreal, M.D. (B.A. ’72), the pediatrician-owner of a clinic in Taos, New Mexico, who treats under-served and chronically ill children.

The University has long been known for excelling at preparing students for medical, dental and graduate programs. While many factors are behind the Department of Biological Science’s formula for fostering successful graduates, it starts with having a clear-cut objective.

“Our goal is to provide people with a well-rounded, faith-centered scientific education that allows them to enter a range of health professions, graduate education, teaching jobs at schools, and jobs in industry,” said Winston Erevelles, Ph.D., Dean of the School of Science, Engineering and Technology.

Mentoring, for the win

Because professors are tasked with educating students, they are among the biggest — and perhaps most important — drivers of success for Biology students at St. Mary’s. 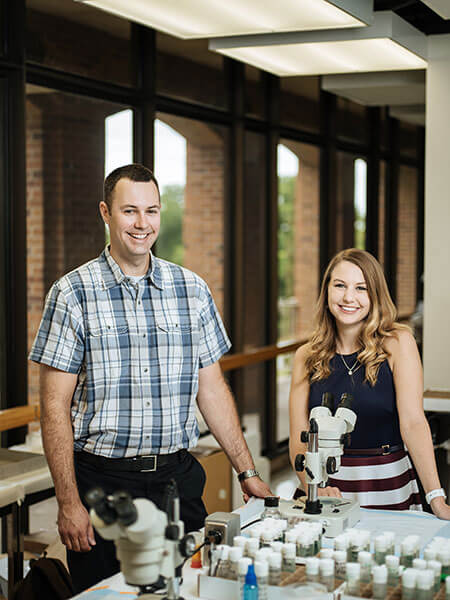 Kristyn Mathewson, D.O. (B.S. ’12), who began her medical residency this summer, credits her mentor, Associate Professor Ted Macrini, Ph.D., with helping her succeed at St. Mary’s and beyond.

Soon after arriving at St. Mary’s, Gaona’s financial situation changed, and he wasn’t sure he could afford to stay.

“But Dr. Daubner and (Physics Professor) Dr. Richard Cardenas got me into the Honors Program, which granted me more scholarship money, so I could stay,” he said.

Gaona, who is a first-generation college student from a single-parent household, said that as a high school student, he “didn’t know anything about SATs or the college application process.” Navigating higher education was challenging but having professors who were involved made all the difference. Feeling like he received a second chance, he hit the books even harder than before, earning a 4.0 GPA his first semester.

“Dr. Daubner was one of the first professors to build my self-esteem,” Gaona said. “She noticed the work I was putting in and gave me confidence.”

For Kristyn Mathewson, D.O. (B.S. ’12), who came to St. Mary’s from Hawaii, leaving her friends and family far away, she had no idea what to expect when she arrived.

A Biology and Exercise and Sport Science double major, Mathewson joined the Honors Program and the Marianist Leadership Program, and found that she could connect with professors on a personal level.

“They were all so approachable,” she said. “It made the transition to college much easier.”

“There was always someone willing to help me get involved with research in the Biology Department,” she said. “They weren’t just professors; they were family.”

She graduated first in her class and scored high enough to select any medical specialty, but her heart was set on general practice. She began her residency at Texas A&M in College Station this July, and plans to become a small-town family physician.

“I could’ve done anything I wanted, but I want to do something where I’m happy and helping others,” she said. “As an osteopathic physician, I’m focused on the whole patient. St. Mary’s is aligned with developing the person as a whole, so they prepared me well for my career as a doctor.”

For Macrini, successful outcomes like Mathewson’s are the goal.

“Nothing makes us happier,” Macrini said. “Of course, the rigor of our curriculum has been essential for preparing our students for medical, dental, graduate or other professional programs after they leave St. Mary’s, but our faculty are especially invested in our students’ success.”

“I still get nervous for my students who take the MCAT,” he added. 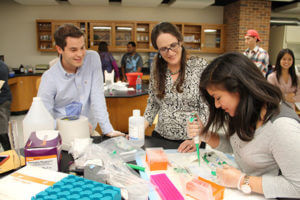 One of the required courses for sophomores is Cell and Molecular Methods, in which professors bring their own original research to class so that students learn techniques from them firsthand, said Tim Raabe, Ph.D., Professor and Chair of Biological Sciences.

This is how St. Mary’s implements what’s known as a Course-Based Undergraduate Research Experience (CURE), which helps students understand core Biology concepts and encourages them to become active in research.

“CUREs are especially beneficial to students in advanced courses,” Raabe said. “Students learn to put together poster abstracts and present them, which develops disciplinary socialization skills they will use throughout their careers.”

Most St. Mary’s students who are interested in health careers are Biology majors. For these students, a number of cooperative partnership programs, known as pre-health professional programs, are available.

Some of them include the Dental Early Admission Program (DEAP) and the Health Professions Early Acceptance Program, which allow students to earn a bachelor’s degree from St. Mary’s in four years or less before matriculating at a partnership school to continue their education.

Combined Sciences senior Millie Garcia is one such student who has benefited from a pre-health professional program. Garcia, also a first-generation college student, applied to DEAP and was accepted the summer before her sophomore year. 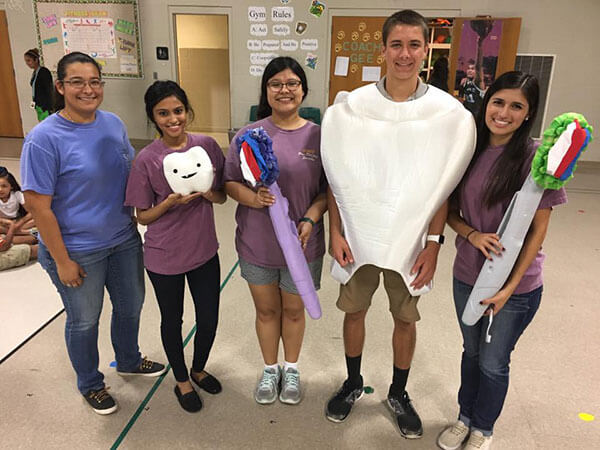 She described DEAP as a “training camp for dental school.” Garcia has completed most of her advanced Biology courses and, after she graduates from St. Mary’s, she will matriculate at UT Health San Antonio’s School of Dentistry.

“I’ve had so much support from family and friends, and faculty who are an excellent resource with their backgrounds and rich life experiences,” she said.

In addition to a growing range of programming, the School of Science, Engineering and Technology has a pre-health professions adviser who meets regularly with Biology majors to discuss their academic progress and helps them identify and apply to programs that match their skills and plans.

“Students can be intimidated by professors and may not ask for help,” Raabe said. “Having a (non-faculty) adviser for Biology majors has made a big difference in that initial contact.”

Learning from the best

One of the best ways to learn something is to learn it from the best, and that is the idea behind the Preceptorship course, which was launched in spring 2016.

For an entire semester, students are paired with St. Mary’s alumni working in the medical field to observe and shadow them and develop a mentor relationship. 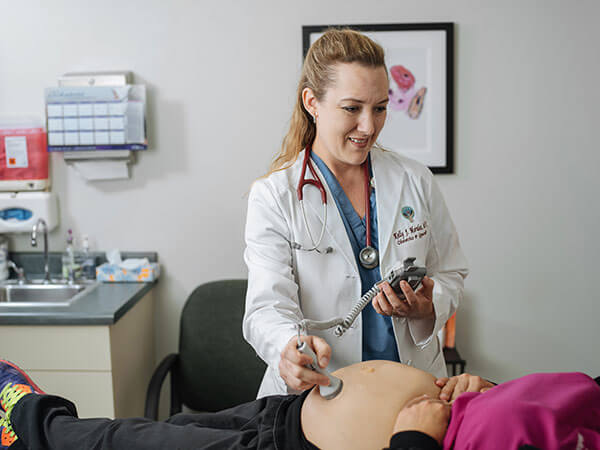 “After spending a few hours with patients in his clinic, I thought, ‘I have to do more of this,'” Gaona said.

His Preceptorship gave him the real-world experience he needed to determine his own path forward, and Gaona is now interested in helping underserved communities.

Kelly Morales, M.D. (B.S. ’99), is also a Preceptorship mentor. After serving in the U.S. Army Medical Corps for 13 years, Morales opened her own obstetrics and gynecology practice in San Antonio in 2014. She is thrilled to pass down what she learned as a student at St. Mary’s, particularly the importance of camaraderie and service to the community.

“I love to see the light bulbs turn on,” Morales said. “It’s really cool to see pre-medical students explore the science and rigor of the profession they’re interested in. At the same time, this is a different generation and with that comes a different set of ideals and culture. So, I’m learning from them as much as they’re learning from me.”

The importance of research

For more than 30 years, the Maximizing Access to Research Careers Undergraduate Student Training in Academic Research (MARC U*STAR) program at St. Mary’s has been an effective driver for Biology students who commit to work toward a Ph.D. or M.D./Ph.D. in biomedical research fields. 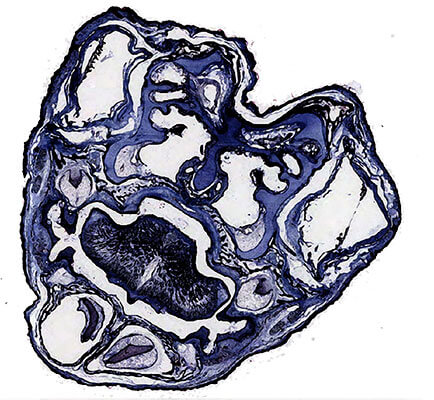 This histology image depicts a cross-section of the nasal cavity of a tammar wallaby (Macropus eugenii). This is being used in research by senior Biology major Jenna Hopwood, who is examining the evolutionary development of the wallaby’s ethmoid bone, which is located at the base of the nose. The research has implications for better understanding the evolution of marsupials in particular and mammals in general. Hopwood is working with Associate Professor Ted Macrini, Ph.D., on the project.

Every year, MARC U*STAR provides a new crop of outstanding students in underrepresented groups the opportunity to complete research alongside faculty, with the goal of supporting them as they prepare for post-graduate programs.

“We’re helping to increase the diversity of the workforce in STEM fields,” said Raabe, who oversees MARC U*STAR at St. Mary’s. “The numbers show that the earlier you involve students in research, you increase retention rates, increase graduation rates and increase the GPAs of graduating students.”

Having students conducting top-notch research requires the right labs and equipment — something St. Mary’s has made a priority for STEM programs overall.

Additionally, the University received a $5.3 million grant in 2016 from the U.S. Department of Education through the Hispanic-Serving Institutions STEM Program, and a portion is earmarked for renovating Biology labs and equipment.

Additionally, the Biology Department has an equipment fund that has supported about $450,000 in new equipment since it was established in 2010, including a powerful confocal microscope.

For the past decade at St. Mary’s, about half of the students who applied to medical or dental schools were accepted, well above the national and state averages. Erevelles credits the school’s culture of “priming the pump” for preparing the students for post-graduate success.

For one, every year St. Mary’s offers two version of JAMP Pre-Medical Summer Camps, one for high schoolers and one for incoming St. Mary’s freshmen, exposing them to the University and helping identify potential future JAMP students. It creates a pipeline of promising students, such as senior Biology major Giselle Angermaier, who spent this summer taking medical school-level courses through JAMP.

Angermaier recently took the MCAT and did well, which she credits to hard work, valuable mentors and JAMP. Next up, she will pick which medical school to attend. 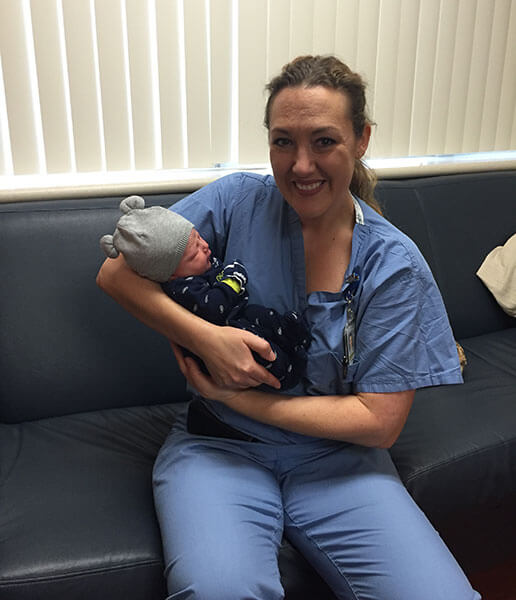 “Without St. Mary’s, I don’t know if I would’ve been accepted into JAMP,” she said. “I’m so appreciative that in each Biology class I’ve taken, the professor has taken the time to get to know me. That’s a blessing.”

Angermaier lived in BLLC as a freshman and remained there during her sophomore and junior years as a mentor. For her senior year, she’ll be the group’s community coordinator.

“Making friends who have similar interests and goals has been really beneficial,” she said. “Being around others who study as much as you helps you stay focused, especially during those long stretches into the night.”

The heart and soul of St. Mary’s is its community, and the same is true of the Biology program. For Morales, who used her St. Mary’s foundation to build a successful medical practice and mentors current students, a legacy of mentorship might be the greatest gift from her St. Mary’s education.

“St. Mary’s has always been about teaching, and it’s where I learned to love education,” Morales said. “I feel reassured that, as I get older, I’m passing my knowledge to capable hands.”

St. Mary’s hosts Lilly Fellows Program to focus on how to engage in Christian higher education

Virtual StMU 5K to raise funds for West Side services