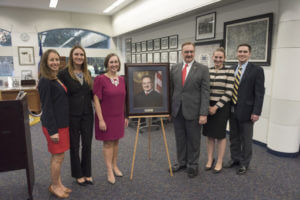 “The School of Law is proud of all that Judge Ezra has accomplished throughout his distinguished career,” said Stephen M. Sheppard, J.S.D., Dean of the School of Law. “Judge Ezra has long been a leader among our alumni, and his esteemed career showcases his commitment to the St. Mary’s tradition of public service. We are greatly honored to hang his portrait among those of our most notable alumni.”