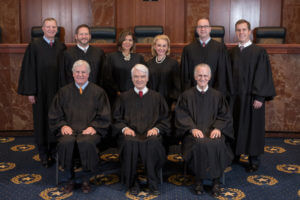 The Supreme Court of Texas will hold arguments for two cases at the St. Mary’s University School of Law courtroom beginning at 10 a.m. Thursday, Feb. 8.

The court, which is based in Austin, is the state’s highest court for civil matters. The court is composed of a chief justice and eight justices, including alumnus Justice Paul W. Green (J.D. ’77).

During the court’s visit to St. Mary’s, it will hear arguments for the following cases:
16-0125, Debra Gunn, Obstetric and Gynecological Associates v. Andre McCoy
16-0770, In the Interest of S.C. and K.C., Children

Doors open at 9 a.m., and oral arguments begin at 10 a.m. in the courtroom of the Law Classrooms Building. No cell phones, backpacks, headgear, food, drink, or cameras and other recording devices are permitted. This event is open to the public. Visitors can enter campus through the NW 36th Street entrance and park in Lot D.

The principal issue is whether legally sufficient evidence supports the verdict that a doctor’s negligence caused a patient’s brain damage. McCoy sued Dr. Gunn and others for negligence after his wife suffered a heart attack then brain damage followed emergency delivery of a stillborn baby. McCoy’s expert witness, Dr. Molly Brewer, testified that Mrs. McCoy suffered so much blood loss from complications following the stillborn birth that her heart stopped because it had too little blood to pump and brain damage resulted from oxygen deprivation. Brewer attributed the blood loss to Gunn’s failure to assure adequate blood-clotting agents and blood transfusions. But Gunn argues that Brewer’s basis for that conclusion is not sufficient evidence because Brewer’s method for assessing Mrs. McCoy’s blood volume was faulty, based on a test that did not measure blood volume, and speculative because hospital records demonstrated Mrs. McCoy got enough blood to offset what Brewer believed she lost. And Gunn contends the reduced blood flow would not have led to brain injury because Mrs. McCoy was getting oxygen through life-support before her heart attack. A neurologist supporting Gunn testified that small clots blocked oxygen to Mrs. McCoy’s brain, leading to the brain injury. Gunn also argues Brewer failed to show her theory for the brain injury was superior to the defense experts’. The appeals court affirmed the jury’s verdict for McCoy and awarded damages close to $10 million.

16-0770
In the Interest of S.C. and K.C.
from Dallas County and the Dallas Court of Appeals
For petitioner: Shelby O’Brien, Austin
For respondent: Scott Hershman, Dallas