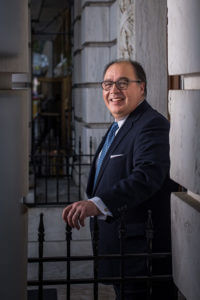 As president and CEO of the United States Hispanic Chamber of Commerce, Cavazos nurtures a strong network of Hispanic chambers around the country, supporting the issues that matter to the Chamber while managing a team at the headquarters in Washington, D.C. For instance, the Chamber has come out in support of the United States-Mexico-Canada Agreement, which replaced the North American Free Trade Agreement. The Chamber also encourages Fortune 1,000 companies to do more business with Hispanic-owned businesses.

“We are interested in making sure we have a healthy environment for our businesses in America that are Hispanic-owned,” said Cavazos, adding that there is a need for more Hispanic-, minority- and women-owned businesses working with Fortune 1,000 businesses.

Since rising from his position as CEO of the San Antonio Hispanic Chamber of Commerce to the national role in October 2018, Cavazos has worked to build trust and confidence with the Chamber’s staff and board of directors.

“Trust is an important factor in successful decision-making. Building that confidence is going to make us stronger as an organization moving forward,” he said. “That network is powerful, and it’s something I don’t take for granted.”

“His networking capabilities, his humor and storytelling ability were always evident and opened doors for him in both the civic and business communities,” Cotrell said.

A graduate of the Master of Public Administration program, Cavazos credits his time at St. Mary’s with providing a family-oriented environment that allowed him to build strong relationships throughout his career.

“That Marianist lifestyle — focused on ethics, morals, doing what’s right, treating others with respect, giving yourself to the community — that has helped me in the work I’ve done,” Cavazos said.

“No matter what I’ve done, I’ve always embodied that Marianist mindset that makes St. Mary’s special. Everyone who goes to school there, graduates from there, works there, has that DNA. It’s a DNA that, I believe, is very humanistic. St. Mary’s taught me to be a better person.”