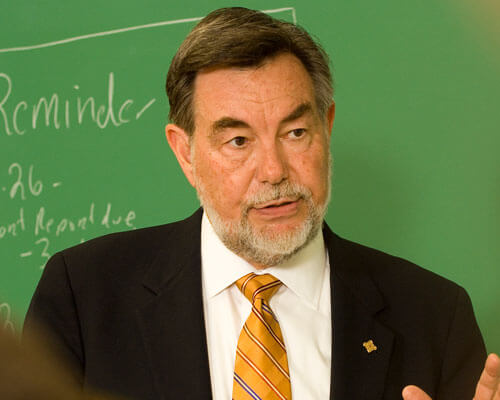 Charles L. Cotrell, Ph.D., was selected by the University’s Board of Trustees as St. Mary’s first lay president in the school’s proud history that dates back to 1852.

Cotrell, who stepped down from the presidency May 31, 2012, to return to teaching and scholarship, has held many positions during his more than 45 year at St. Mary’s, serving as department chair, director of graduate programs, dean of the School of Humanities and Social Sciences, assistant to the president for planning and research, and vice president of academic affairs for 14 years.

His top priorities as president included: a commitment to service learning and civic engagement (which resulted in numerous national recognitions); recruitment and retention of top students; strengthening the Catholic and Marianist tradition of St. Mary’s; advancing the academic mission, especially in information technologies and new academic programs; maintaining a diverse student body, faculty and administration; and increasing the general endowment for essential needs, including student scholarships and faculty development.

A tenured professor in political science, Cotrell is well known for his expertise on issues involving elections systems and minority participation. He has been a consultant to the U.S. Department of Justice on these issues, and he is the author of numerous articles in professional journals. He has presented his research on Capitol Hill regarding federal voting rights cases.

Promoting St. Mary’s as a premiere Catholic and Marianist liberal arts institution by advancing academic excellence was one of Cotrell’s priorities a president. Accomplishments included: acquiring academic chairs; establishing partnerships with The University of Texas Health Sciences Center at San Antonio and with multiple educational institutions abroad; developing hubs of scholarship and leadership development; and implementing academic innovations for students. He secured federal funding for information technology that transformed traditional classrooms into “smart” learning laboratories, wired the campus, and ensured faculty and staff are trained in the newest teaching technologies.

Under his leadership, the University’s physical plant was enhanced, including openings of numerous facilities and completion of several campus beautification projects. His hopes for St. Mary’s future resulted in a comprehensive Facilities Master Plan, elements of which were completed or in progress at the end of his presidency. In addition, he launched the St. Mary’s University Neighborhood Revitalization Project that led to many improvements to the neighborhoods surrounding the University.

Cotrell was instrumental in raising more than $100 million during his presidency, including the University’s largest single gift of $25 million from former Valero Chairman and St. Mary’s alum Bill Greehey. In addition, more than 100 endowed scholarships for students were added, and the University’s endowment grew to the highest level in the history of St. Mary’s.