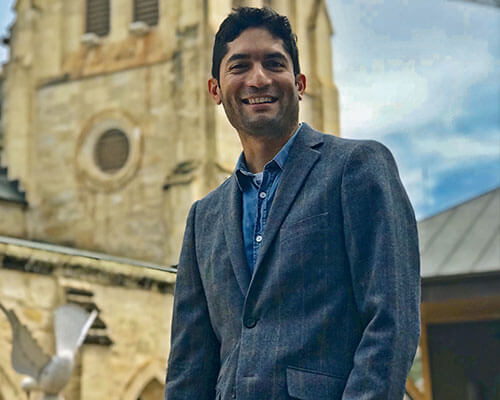 Matthew Mireles (B.A. ’07) is the Chair of the Department of Music and Director of Bands at St. Mary’s University, serving as conductor of the Wind Ensemble, and professor of conducting, music education and euphonium. Under his direction, the St. Mary’s University Wind Ensemble performs a yearly season of concerts around the cityand regularly commissions and premieres new works for band. Mireles also works with the top-conducting students as part of the University’s “Apprentice Conductor” program.

In addition to his responsibilities at St. Mary’s University, Mireles is the Musical Director and Conductor of the San Antonio Brass Band. The ensemble reached international acclaim as winners of the 2018 North American Brass Band Association 1st Section Championship, achieving the highest score of any ensemble in North America. The ensemble performs throughout South Texas, while also providing masterclasses for high school and middle school band students. Members of the ensemble include performers with the San Antonio Symphony, the United States Air Force Band of the West, the 323rd Army Band, professors from Texas State University, St. Mary’s University, Trinity University, University of the Incarnate Word, University of Texas at San Antonio, San Antonio College and top music educators from the area.

Mireles is also conductor of the famous Backburner! Tuba-Euphonium Ensemble. The group is comprised of some of the finest low brass performers in the world and regularly performs at international brass conferences.

Also an active chamber musician, Mireles plays euphonium with the internationally renowned Boreas Quartet. Their album, “The Serpent’s Kiss,” was the winner of the 2016 ITEA Roger Bobo Award for Recording Excellence, the highest award internationally for low brass. Their second recording, “Whirlwind,” is scheduled for release in 2019.

Prior to moving back home to San Antonio, Mireles was the Joye R. Lenz Endowed Professor and Director of Bands and Low Brass at Cameron University in Lawton, Oklahoma and also the Conductor of the Frontier Brass Band. Mireles also held positions as conductor of both the University Band and Tuba-Euphonium Ensemble at the University of Wisconsin-Madison while also teaching undergraduate euphonium.

Mireles is in high demand all over the world as a conductor, clinician, performer, teacher, adjudicator, public speaker and advisor. He earned a Doctor of Musical Arts degree from the University of Wisconsin-Madison, a Master of Music degree from the University of Alabama and a Bachelor of Arts degree with Teacher Certification from St. Mary’s University. His major teachers have been John Stevens, Demondrae Thurman, D.M.A., Lee Hipp, Scott Teeple and Mark Hetzler.