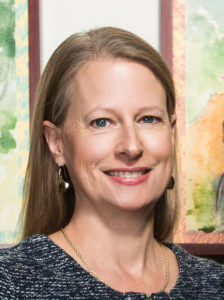 Days after Hurricane Harvey hit Texas, Mona Mengler opened a box containing a tube of toothpaste, a toothbrush and a bar of soap.

She thought, “Why bother?” when Hurricane victims needed so much more.

Then it hit her — it may have been all someone could spare. She visualized the Gospel parable of the elderly widow with only two copper coins for an offering. That thought motivated her as she volunteered for more than a month with Catholic Charities of San Antonio.

“It was rooted in faith and genuine caring,” she said of that touching gift, as well as the encouraging notes people packed with donations.

Mengler and the St. Mary’s community jumped into action as soon as it became clear that San Antonio would avoid the worst of  “the most significant tropical cyclone rainfall event in U.S. history,” according to the National Hurricane Center.

Mengler — and husband Thomas Mengler, President of St. Mary’s —are longtime supporters of Catholic Charities, so it was natural to answer the call. The outpouring of food, water, bedding, clothes and other necessities was great, but “it was total chaos,” she said.

She saw a lot of overwhelmed faces at Catholic Charities, so she took charge of the effort to process mountains of donated items.

As chaos gave way to efficiency, Catholic Charities sent 65 truckloads of supplies to Houston and the Texas coast.

For her efforts, Mengler earned Catholic Charities’ Volunteer of the Year award. The real reward, she said, was the sense of purpose.

“It was quite the privilege to throw myself into something that was really going to help people,” she said.

It’s not over. A group of  St. Mary’s students will spend Spring Break helping Rockport, Port Aransas and Victoria rebuild.