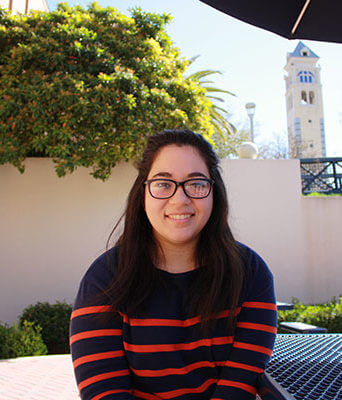 Iliana De La Cruz is curious about the world.

For as long as she can remember, De La Cruz has wondered about how and why things work.

When she came to St. Mary’s University as a freshman, De La Cruz wasn’t sure how to focus that curiosity. However, after talking it over with a few of her professors, she declared two majors — Mathematics and Physics — and went to work finding the answers she was looking for.

From there, De La Cruz flourished. The junior double-major has since taken her wonder about the world from her native San Antonio to several professional conferences, including in California and Washington, where she has presented research. Last year at the Mathematical Association of America’s annual meeting in Austin, De La Cruz took home an award for the Best Talk.

Some of her research has included testing DNA mutations in cancer patients and analyzing data on quantum dots, which have been most notably used to improve screens in phones, tablets, TVs and laptops.

“Dr. (Richard) Cardenas opened up my eyes to research,” she said. “It started when he dropped me an application. Now, being a double-major involved with research, I’ve learned that there’s a path out there where my questions can be answered.”

De La Cruz lights up when talking about her experiences at conferences.

“Conferences have been great for the traveling, of course, but also for meeting people across the country with the same interests as me,” she said. “Seeing grown-ups, with all kinds of different accents and in different cultures, come together to do something really cool, who have built their careers around their academic studies, it’s just awesome.”

There’s no “special recipe” to her success, she said. While De La Cruz says a prayer before each exam, she said her achievements have boiled down to her dedication to hard work.

“The only way you can figure out how to solve a problem is by practicing doing it,” De La Cruz said. “It’s persistence. You have to keep following the science. It’s hard work, but if I can do it, anyone can do it.”

Now on the back end of her undergraduate career, De La Cruz still wonders about where she would like to go and what she would like to do after St. Mary’s. However, she’s narrowed down her research interests to “something applied, something hands-on.”

“I keep finding myself going back to education,” she said. “What I really want to know is, ‘Are we teaching physics to students in the best way that we can?'”

That’s why when Fiesta of Physics come around — a twice-a-year event organized by the Department of Physics and Environment Science for surrounding elementary school children to partake in fun science demonstrations — De La Cruz is overjoyed.

The outreach to younger generations is her chance to do what she does best: spread wonder about the world.

“I look forward to these events the most,” she said. “They’re fantastic. I get to explain to kids all the really cool stuff about physics. Seeing them awestruck is the best.”

De La Cruz said no matter where she ends up, she wants to be a good steward of her education.

“St. Mary’s has taught me that it’s OK if I don’t know exactly what I’m going to do, so long as I’m helping people and giving back to the community,” she said.

“That’s what this community is about.”

More from the Spring 2017 Issue

The Rev. Jason Martini (J.D. ’02) sensed a calling to join the priesthood from an early age. He remembered first feeling the pull after First Communion when he started serving at Mass. 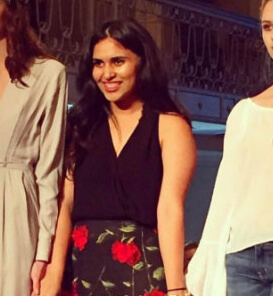 When she was a little girl, Chantel Avila (B.B.A. ’15) wanted to be a lawyer like the character Elle Woods in the movie Legally Blonde. But Avila didn’t want to be a lawyer — she just really loved the character’s extensive wardrobe. At age 9, Avila asked her mom to buy her a sketch pad that she quickly filled with drawings of clothing designs. 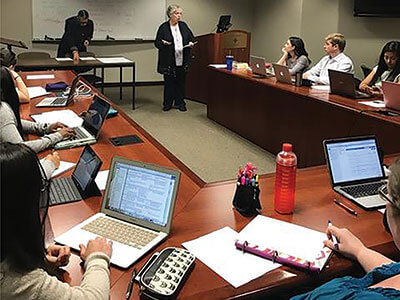 The St. Mary’s School of Law began piloting an innovative course this spring that teaches law students about issues related to representing clients in the abuse and neglect docket of Bexar County’s Children’s Courts Division.