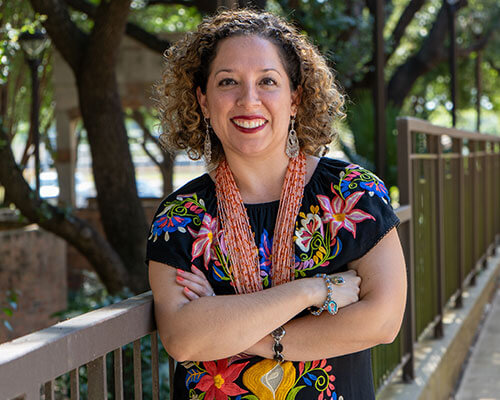 Margaret Cantú-Sanchez was born and raised in San Antonio, Texas. She is an alumna of St. Mary’s University’s English undergraduate and graduate programs. St. Mary’s holds a special place in her heart for numerous reasons including the fact that her aunt, brother, sister-in-law, and husband graduated from there. St. Mary’s was the place where Margaret honed her teaching skills in preparation to teach high school, and it was the first place where she taught college-level courses. At St. Mary’s, Margaret also had the opportunity to take part in the London Study Abroad Program and the 5-Year English Degree Teaching Certification Program. St. Mary’s is where Margaret met her husband and they now have 2 rambunctious children together.

After St. Mary’s, Margaret taught high school English for a time and soon decided to pursue a doctoral degree at The University of Texas at San Antonio. It was at UTSA that Margaret became immersed in Chicanx/Latinx Cultural Studies and Literature. After UTSA, Margaret taught at numerous institutions in San Antonio including UTSA, Our Lady of the Lake University, and Palo Alto, eventually ending up back at St. Mary’s. Margaret has been teaching at St. Mary’s for three years now and enjoys exposing her students to Multi-Ethnic and Chicanx authors, literature and culture. Her approach is one that simply asks students to contemplate the importance of their identity and place in the world in relation to the literature they read.

2018    “The Fourth Choice:” Forging the Future of Chicanx Mother/Daughter Relationships through Storytelling and The Path of Conocimiento in Erika Sánchez’s I’m Not Your Perfect Mexican Daughter and Barbara Renaud González’s Golondrina, why did You Leave Me?, Label Me Latina/o: Journal of Twentieth and Twenty-First Centuries Latino Literary Production. Eds. Michele Shaul and Kathryn Quinn-Sánchez

2016    “In/civilities of the American Classroom: A Clash between a Chicana Teacher and an Anglocentric School System” El Mundo Zurdo 5: Selected Works from the Meetings of the Society for the Study of Gloria Anzaldúa 2015.  San Francisco, CA: Aunt Lute Books.

Cantú-Sanchez also penned an op-ed based on the topic of the symposium, Mexican American Studies fills the gaps of our history, which was featured in the San Antonio Express-News.

To view a list of helpful resources from the conference, visit lib.stmarytx.edu/mas. Click here to view a video recording of the event.

“Reaching Conocimiento: Personal Stories as Healing and Coping with Cultural Identity Conflict in the Literature Classroom.” El Mundo Zurdo: International Conference on the Life and Works of Gloria Anzaldúa, 2018.

“Bridging American and Mexican Cultures and Reinforcing Chicana/o Identity in the Nepantla Classroom.” El Mundo Zurdo: International Conference on the Life and Works of Gloria Anzaldúa, 2016.

“In/civilities of the American Classroom: A Clash between a Chicana Teacher and an Anglocentric School System,” El Mundo Zurdo: International Conference on the Life and Works of Gloria Anzaldúa, 2015.

“Chicana Education Testimonios as a Methodology of a Mestizaje of Epistemologies,” NACCS XL, March 2013.