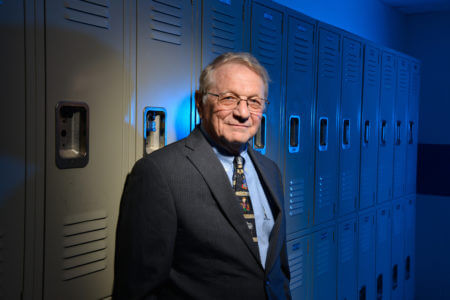 As he approached the bench, Albert Kauffman, J.D., knew this case would be an uphill battle.

The public school education finance case, Edgewood ISD v. Kirby, had previously been won at the district court level, but was overturned by the Court of Appeals for the Fifth District of Texas. Now, it was before the Supreme Court of Texas in 1989.

“We are here today to determine whether the Texas Constitution requires the Legislature of Texas to treat people equally — especially to treat students equally — and to meet the legislature’s constitutional duty to establish a suitable and efficient school finance system,” said Kauffman, now Professor of Law at St. Mary’s University.

“The amount of money spent on a student’s education has a real and meaningful impact on the educational opportunity offered that student,” Mauzy wrote.

“We thought we had mastered the world,” said the victorious Kauffman, who has since become a master of the lecture hall as well as the courtroom.

Kauffman, who left MALDEF in 2002, has litigated many cases throughout his legal career, including affirmative action, local and state voting rights, employment discrimination, immigration and hospital admission policy cases.

In his 12 years of teaching at the School of Law, Kauffman has come to love the students at St. Mary’s and they’ve reciprocated, twice selecting him as a Law Commencement hooding officer.

“Putting the hoods on them, patting them on the back, shaking their hands, and watching as they were going through one of their defining moments, I got emotional,” he said. “I’m just amazed at how resilient our students are. I’m proud of them.”