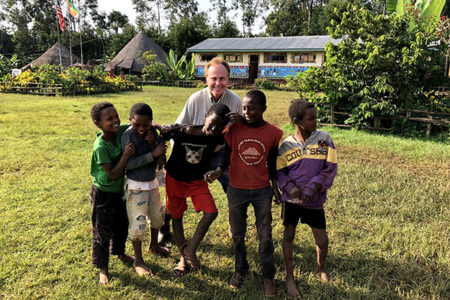 What struck Professor of International Business Jeffrey Johnson, Ph.D., most was the orphans’ joy.

“They were amazing, happy, always smiling, always wanting to play volleyball or soccer,” Johnson said of the 160 African children in kindergarten through fourth grade sheltered by Common River, a U.S.-based nongovernmental organization in the town of Aleta Wondo in Ethiopia.

For more than a week in June, the Greehey School of Business professor and his wife, a UT Health San Antonio faculty member, stayed in the campground at Common River to carry out pro bono work — he to assist the NGO’s co-founders and staff in re-engineering their coffee-growing business model, she to perform dental checkups
on patients.

“The first five days, I observed and noted all aspects of their operation,” said Johnson, who then offered recommendations on how to generate sufficient cash flow via ecotourism.

Johnson described the coffee of Aleta Wondo — what the town and its surrounding region are known for — as a dark roast enjoyed during daily coffee ceremonies. For the ceremonies, the townspeople “smash the beans by hand using a mortar and pestle.”

Johnson said there are heartbreaking challenges, primarily caused by poverty, for the people living on the land.

In addition to the children, Common River also shelters about 100 women, many of whom are illiterate to the point of not being able to sign their names in their native Amharic language, he said.

Common River’s mission is to provide a safe haven and education for the women and children of Aleta Wondo so they can build a vibrant, self-sustaining village.

Johnson’s stay at Common River developed a relationship that he believes will continue.

“I’ve done 25 study-abroad trips while I’ve taught at St. Mary’s University,” he said. “While I funded this trip on my own, this is what we’re all about at St. Mary’s — helping people wherever they need.”