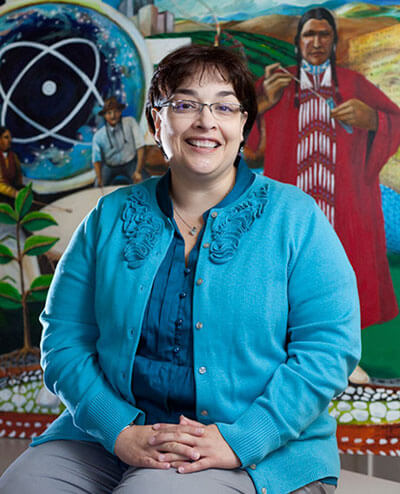 From At-risk Undergrad to Chief Mentor

Alumni
January 25, 2013
Tina Garza (B.S. ’91) came to St. Mary’s University as a third-generation American, but a first-generation college student from a family with an income she delicately described as “of a certain level.” Garza was what higher education professionals considered at-risk for not returning for her sophomore year, and perhaps a long shot for graduating at all.

Garza knows the deck was stacked against her. But she also knows what made the difference: the support of her mentors. A St. Mary’s professor encouraged Garza to apply for a summer research internship far away from both campus and her hometown of El Paso. That summer at the University of California at Irvine changed the direction of her life.

Through that internship, Garza joined a national group that mentors and supports young minority scientists called the Society for the Advancement of Chicanos and Native Americans in Science (SACNAS). And earlier this year, she became the first scientist to be named executive director of SACNAS in its almost 40-year history. It may seem counterintuitive that a research immunologist would become the leader of a nonprofit, but Garza knew all along that her path would lead her to mentoring.

She remembers a particularly challenging time during her graduate work in Virginia when she was the only minority in the entire graduate school.

“I’m a third-generation American, but I grew up in a town on the Mexican border. They made fun of me, said that I had an accent. They would say that I only received my fellowship because I ‘had the right last name,'” she recalls. “I had to keep reminding myself that I got this because I was qualified.”

And she doesn’t believe her story is unique. The challenges she faced as a first-generation Hispanic student are shared by many students today, and SACNAS is there to help them find success.

“For members of SACNAS, there is this universal sense of how we should bring together both our culture and our love of science without losing our identity. I want students to know that they can be all of those things.”