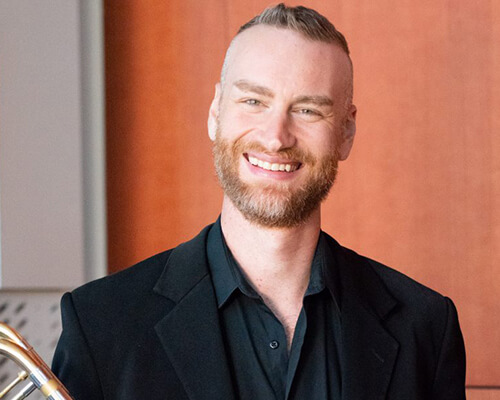 Steve Peterson has performed as principal trombone with the San Antonio Symphony since 2016. He has also performed with the Dallas Symphony, Cincinnati Symphony, Detroit Symphony, and Fort Worth Symphony Orchestras. He has a Bachelor of Music in trombone performance from the University of Michigan where he studied with David Jackson, and a Masters of Music from Southern Methodist University where he studied with John Kitzman. Peterson has taught at Richland College in Dallas, and Texas State University in San Marcos as an interim faculty member. He is currently an adjunct professor of trombone at St. Mary’s University.

Peterson has performed with many groups including DFW Brass, Bishop Arts Brass, and the Dallas Symphony “Yes” Brass Quintet. Prior to moving to Texas in 2011, Peterson played in jazz and commercial ensembles on Princess cruise lines, which allowed him to travel to Europe, Australia, Asia, South America and the Caribbean. Peterson is also a videographer and creates many original satirical and documentary videos that can be found on his YouTube channel, petersonproject.