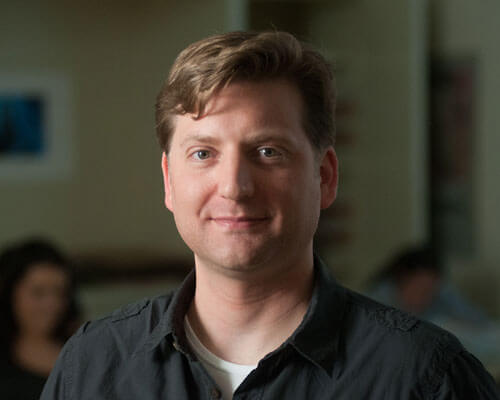 James Joffe is an experienced visual artist and art educator with a demonstrated history of working in the higher education industry. Skilled in lecturing, student development, painting and research, he is a strong education professional with a Master of Fine Arts terminal degree focused in Studio Painting from the University of Texas at San Antonio.

Born in San Antonio, Joffe spent his formative years traveling the American Southwest. During this time, he spent many hours in the back seat of his family’s car looking out on the passing scenery of this region; he became fascinated with the interaction between the natural geography of the landscapes as well as the encroachment of the cities and its architectural structures. Growing up in this environment and seeing the beautiful tension of this contemporary landscape has greatly contributed to the inspiration of Joffe’s artmaking.

As a working visual artist, Joffe focuses on producing and exhibiting his artwork, which he has done since 1994. His artworks have been exhibited in solo, two-person, group and competitive shows; and he has been selected for multiple regional, statewide and nationally juried art competitions. Recently Joffe had his works exhibited in the prestigious “New Texas Talent XXV” 2018 at Craighead Green Gallery in Dallas, and in the annual “Texas National” in 2010, 2016 and 2017 hosted by Stephen F. Austin University. He received the “Chrissie & Daniel Warner Donor Award” for a painting selected for the “89th San Antonio Art League & Museum Annual Juried Exhibition” in 2019. Joffe has had several works published in several gallery and exhibition catalogues as well as articles about his work, including “Artist inspired by S. Texas landscape” by Steve Bennett in the February 17, 2013 edition of the San Antonio Express-News.

Joffe has taught studio art and design at the university level since 2002 and has been a full-time faculty member at St. Mary’s University since 2010.

As an art educator, his focus and instruction has been on foundation art practices from oil, acrylic and watercolor painting to design fundamentals, color theory and drawing. He is also well versed in new digital media, and helped develop courses in introductory digital studio art and digital painting at St. Mary’s.

In Joffe’s studio art practice, his artwork evolves from connections he makes out of collected elements perceived in his visual surroundings.  Color, shape and textural interactions observed are pulled like fragments from the contemporary landscape. Sparking his curiosity, these visual relationships are used as source references for compositions created by traditional and digital means. The designs evolve intuitively at first, as fragments are layered and interwoven. The process engages memories and evokes transitory moments remembered influencing the direction of the design. Meaning and resolution comes as elements drawn and manipulated begin sparking unique visual connects within the overall composition. The finished artwork becomes a perceptual mixture of these collected passing reflections presented as a designed memory.