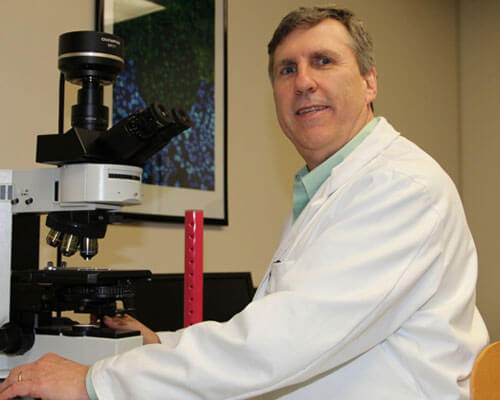 Gary B. Ogden, Ph.D., Professor of Biological Sciences at St. Mary’s University, is very appreciative of being able to share his enthusiasm for genetics, cell biology and microbiology with his students. Ogden first developed a love for teaching in graduate school. After earning his Ph.D., he held postdoctoral positions at Tufts School of Medicine and the National Institutes of Health, and both institutions provided him with opportunities to teach graduate and professional students. After his tenure at the NIH, he obtained a research faculty position at Yale University’s School of Medicine. However, his long-term goal was to teach undergraduates, and he left Yale in 1991 to join the Biology Department at St. Mary’s.

Ogden believes his wide-ranging research experience has enabled him to be a better teacher. He has used the methods of molecular genetics, biochemistry and cell biology throughout his career. Ogden has studied chromatin in the DNA tumor virus SV40 and DNA replication in Escherichia coli, respectively, and has performed primary research concerning vaccine development and the virulence mechanisms of several important microbial pathogens. At Tufts, Ogden made the seminal observation that epigenetic changes (i.e., methylation of GATC sequences) in E. coli’s origin of replication may regulate the ability of the cell to initiate new rounds of DNA replication.

While at St. Mary’s, Ogden obtained research grants with a colleague at the University of Texas Health Science Center at San Antonio (UTHSCSA), and they proved the efficacy of a novel genetic approach to vaccine development, using as a model the organism Leishmania donovani, an important agent of tropical disease. In 2005, while on a sabbatical at Harvard Medical School, Ogden conducted proprietary research to introduce directed gene knockouts into mycobacteria to aid in better understanding and combating tuberculosis. He has also collaborated with colleagues at St. Mary’s and the UTHSCSA on research concerning the stimulation of apoptosis in a breast cancer cell line and other projects. Most of these studies have enabled St. Mary’s Biology majors to participate actively in laboratory research. In 1996 and 1997, Ogden received fellowships from the Brazilian National Science Council to co-direct and teach a laboratory research-based molecular biology course at the Butantan Institute in Sao Paulo, Brazil. The success of this endeavor led to Ogden’s obtaining a grant from the National Science Foundation in 1998 to introduce more St. Mary’s students to bench research, by incorporating authentic research experiences into undergraduate laboratory courses.

Ogden was appointed to the Local Organizing Committee for the 44th Annual Meeting of The American Society of Tropical Medicine and Hygiene in 1995. From 1999 to 2004, he was the program director for the NIH-Support for Continuous Research Excellence Program at St. Mary’s University—for the first time, providing facilities and funding for faculty research on campus. In 2009, Ogden received the Distinguished Faculty Award for Teaching Excellence from St. Mary’s University, and the St. Mary’s University Alumni Association recognized Ogden with the Gateway Million+ Club Award in 2015.