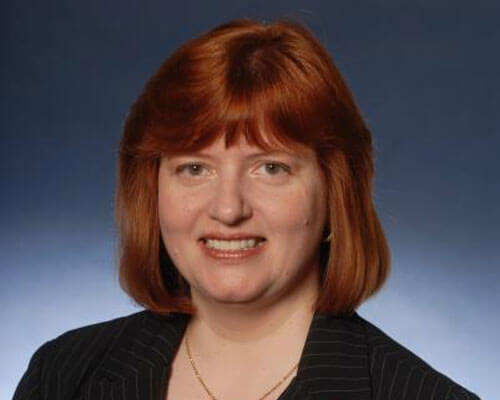 Céline A. Jacquemin, Ph.D., was born and raised in the Alps in the South of France. Dr. Celine, as her students call her, received her Ph.D. from the University of California, Irvine in 2003. She came to St. Mary’s University in 2004 to teach and direct the program in Undergraduate International Relations. She is now a Professor in Political Science who specializes in International Relations. Jacquemin served as the Associate Dean for Curricular and Student Affairs in the School of Humanities and Social Sciences from July 2009 to August 2017. In June 2017, she became Chair of the Political Science Department. In June 2018, she came back to serve as Associate Dean for Dean Frost while remaining as Chair for the Department of Political Science.

Her early research examined how international actors understand and frame cases of massive human rights violations and how this framing impacts the possibilities for international intervention. Her expertise covers parts of Europe and the Great Lakes of Africa where she more closely studies Rwanda.

Jacquemin has been called as a pro-bono expert witness for political asylum cases often linked to female genital mutilation under the hospices of the St Mary’s University Center for Legal and Social Justice. She served as a board member-at-large for INFRAGARD 2011-2016 (the organization that coordinates security information and community outreach with the FBI).

She spent months in Rwanda and Kenya where she studied and processes of development focused democratization and the role of Catholic Education respectively. Her current research assesses institutional organization and outcomes in Rwanda where development has grown at a very fast pace thanks to a combination of zero tolerance to corruption, loads of generous international investments, multiple layers of non-governmental organizations, serious investment into the young people’s education, while fostering technology and communication with unprecedented internet access in Kigali.

Jacquemin is pursuing a new line of research in Algeria in North Africa. She studies the Movement of Berber Kabyles. In Summer 2018, she is returning to Algeria where she’ll travel in Kabylie, in the Djurdjura Mountains.

Her chapter on “The Politics of Evangelization through Education and Development: Marianist Projects in Kenya,” assesses the work of several Marianist Projects in Nairobi, Kenya. It was published in 2016 in the volume entitled Contentious Politics in Africa: Identity, Conflict, and Social Change, edited by Toyin Falola and Wanjala Nasong’o, by Durham: Carolina Academic Press.

In 2015, Jacquemin published several works that focused on Rwanda from looking back at the roots of the Rwandan Genocide in “Hegemony and Counter-Hegemony: Colonial and Post-Colonial Roots of the Rwandan Genocide” in The Roots of Ethnic Conflict in Africa: From Grievance to Violence edited by Wanjala S. Nasong’o, Palgrave Macmillan. (October) to documenting the very promising progress made by Rwandans in her chanter published in August, 2015: “Rwandan Government & Diaspora: Harnessing the Power of Institutions Built for Unity & Democracy” in Slavery, Migrations, and Transformations: Connecting Old and New Diasporas to the Homeland edited by T. Falola & D. Sanchez, Cambria Press Inc. Her short work in spring 2015 “Why do YOU study Genocide?” Pecan Grove Review, Volume XVI recounts her conversation with Professor Ervin Staub about the roots of their common interest in studying Genocide.

In 2014, she shared an introspective piece about the road to training in self-defense “Fulfilling my Wildest Dream” Pecan Grove Review, Volume XV

In 2013, she established her expertise on the relationship between France and Rwanda with her chapter: “14. French Foreign Policy in Rwanda: Language, Personal Networks, and Changing Contexts” in The Political Economy of Development and Underdevelopment in Africa edited by Toyin Falola & Jessica Achberger, Taylor & Francis.

Her earlier publications include: “Female Genital Cutting: shattering the debate yet still violating human rights” published in Revista Espaco Academico April 2010 & “Allied against all odds to fight genocide: How far has the US come?” Revista Espaco Academico November 2008. She also co-authored a chapter with Alison Brysk “Bridging Borders for Human Rights” in Transnational Civil Society edited by Batliwala & Brown and published by Kumarian Press in 2006.