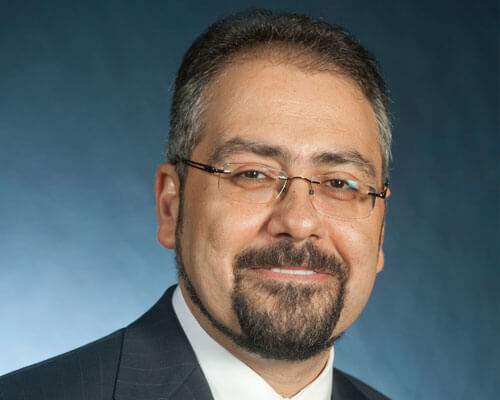 Ahmad Galaleldeen, Ph.D., earned his bachelor’s, master’s and Ph.D. in Biochemistry. During his Ph.D. and postdoctoral tenure at UTHSCSA, he was trained as a biochemist and a structural biologist. Following his bachelor’s, he held a chemistry and biology teaching position in Egypt for six years before moving to the US. While pursuing his master’s, he also held an algebra and chemistry teaching position at the Presbyterian Pan American School in Kingsville.

Galaleldeen joined the laboratory of Dr. John Hart at UTHSCSA in 2003 and focused his research on the familial form of amyotrophic lateral sclerosis (ALS) also known as Lou Gehrig’s disease. ALS is the most common adult motor neuron disease, characterized by the progressive destruction of both upper and lower motor neurons. The disorder typically manifests as muscle weakness in the extremities that progresses throughout the body, resulting in paralysis and death generally within five years post-diagnosis. Approximately 20 percent of the familial cases are linked to mutations in the copper-zinc superoxide dismutase (SOD1) gene. Galaleldeen determined the crystal structure of several pathogenic SOD1 mutants including A4V, the most common ALS mutation in North America, in its metal free form.

During his postdoctoral training in the Hart lab, Galaleldeen collaborated with Dr. Guangming Zhong on a project to understand Chlamydial pathogenesis. Chlamydia trachomatis is an intracellular gram negative bacterial pathogen with many different strains that infect and cause disease in humans and animals. C. trachomatis infection of the urinogenital tract is the most common sexually transmitted disease in the world. C. trachomatis can also infect the eye, causing trachoma that can lead to blindness. Galaleldeen characterized and determined the structure of pgp3, an immuno-dominant antigen that is heavily secreted by C. trachomatis into the cytoplasm of the host cells in the first 24 hours post-infection.