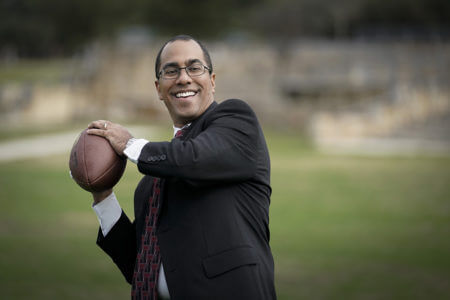 Professor of Law David Grenardo, J.D., invites students to pray before class. At the end of the prayer, he asks them to treat each other with dignity and respect.

“As lawyers, we have to argue passionately, but we don’t need to be rude and obnoxious. It’s just like in sports, if you think about the NBA today. LeBron James of the Los Angeles Lakers, Dwyane Wade of the Miami Heat, Chris Paul of the Houston Rockets and Carmelo Anthony are all good buddies. But they really try to destroy each other on the court,” Grenardo said.

The analogy is fitting, given that last spring Grenardo started a Sports Law course, which touches on different aspects of the law — constitutional, employment, antitrust and contract.

As a former kick returner and defensive back for Rice University, Grenardo offers a unique perspective on sports law. He’s frequently published in law journals and in the press — including the New York Times — on whether college athletes should be paid, one of the hot-button topics the class covers.

Discussions occasionally get so heated that Grenardo said he took his students up on a joking suggestion to implement a penalty box “because they know I write about civility.”

Civility isn’t just a topic Grenardo publishes about or teaches in his Professional Responsibility class. It’s something he tries to impart to his students in everything he does.

It’s why he often takes time to review students’ résumés and cover letters, chaired the committee to search for the Beirne Director of the University’s newly established Center for Catholic Studies and has accumulated numerous hours of pro bono service.