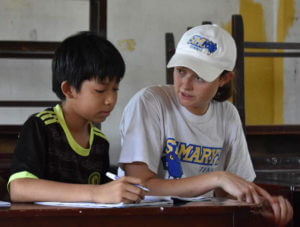 “You’re going to be crying,” Petersen recalled fellow camp instructors telling her. “You’re not going to want to leave.”

Petersen, a Finance and Risk Management major on the St. Mary’s Women’s Tennis team, was in Vietnam in July and August volunteering for a service-learning program called Coach for College. The program pairs American student-athletes and Vietnamese university students to teach academics, sports and life skills to disadvantaged children in rural Vietnam.

The junior is the definition of student-athlete. A standout in class and on the court, she reached the Intercollegiate Tennis Association’s South Central Regional Doubles Championships in 2016, receiving ITA Scholar-Athlete and First-Team All-Heartland Conference honors along the way. She also earned all-conference second team recognition in 2017.

As her time to leave Vietnam neared, Petersen thought she would escape the grief countless others had felt upon leaving.

That was, at least, until her last day arrived.

“It hit me really, really hard,” Petersen said. “The kids make the most delicate little gifts for you. A lot of them wrote letters to us. After giving us those gifts, they’re just standing there, sobbing. They’re hugging us and won’t let go, holding on so tight. 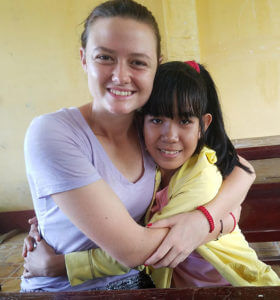 Petersen formed a close bond with eighth- and ninth-grade students during her three weeks in Vietnam.

“It makes you realize how much of an impact you can have on someone’s life.”

Petersen, a Greehey Scholar and President’s Ambassador at St. Mary’s, knew she had entered a different world as soon as she landed in the Hậu Giang Province, located in southern Vietnam.

Responsible for teaching eighth- and ninth-graders skills such as developing goals and encouraging teamwork, she was struck by the condition of the school and surrounding homes.

“There were broken windows everywhere, no air conditioning, wasp nests all over the place,” Petersen recalled of the school. “Complete chaos.”

The nearby homes were in similar disrepair, featuring palm and banana leaves as exterior walls, tin roofs, and hammocks and wooden pallets for beds. One such home, with 5-foot-high metal sheets and curtains stapled together to form walls, was attached to the tennis court where Petersen practiced with the children.

“Here we are whacking tennis balls into their living room,” said Petersen, whose trip was made possible by the support of numerous St. Mary’s faculty and staff. “Yet the family didn’t care. They had a little girl who would come to the court every day with this big smile on her face.”

No matter the children’s circumstances, smiles abounded, she said. This, more than anything, left an impression.

Most of the children knew little English, requiring the Vietnamese university students to translate for Petersen and the other Americans. But even with this language barrier, lifelong bonds formed. 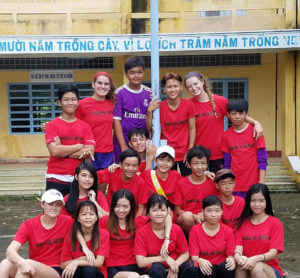 “Every day the kids would show up at our guest house on bikes and offer us rides on the back of their bikes,” said Petersen, who remains in contact with several of the children through social media. “Little memories like that: You could see the impact on some of their lives very tangibly.”

Intending to help others through her time in Vietnam, she said she returned home better off, as well.

“It showed me what it means to someone just to give them your time,” Petersen said. “It made me re-prioritize what’s most important. Is it about going through life and having an income? Or is it about impacting people’s lives?

“People are the most important thing we have.”