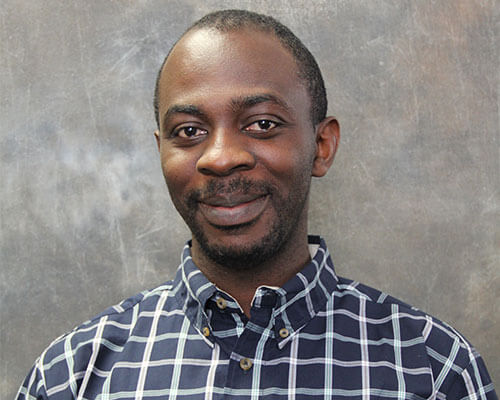 George Anquandah, Ph.D., received his B.S. in Chemistry from Kwame Nkrumah University of Science and Technology in Kumasi, Ghana. He continued to Technical University of Braunschweig in Germany to pursue an M.S in Chemistry where he studied in the Institute of Ecological and Waste Analysis. He further obtained a Ph.D in Analytical Chemistry from Florida Institute of Technology in Melbourne, Florida. His Ph.D was involved remediation and the use of iron as an oxidizing agent to remove pharmaceutical from drinking and waste water.

After graduating from Florida Tech 2011, Anquandah was appointed as an instructor in the College of St. Benedict and St. John University in St. Joseph, Minnesota. He taught both introductory and measurement chemistry using a problem base learning pedagogy. He was appointed a visiting assistant professor in St. Olaf College in Northfield, Minnesota, in 2014. Anquandah taught analytical and general chemistry courses until joining the St. Mary’s community in August 2016.