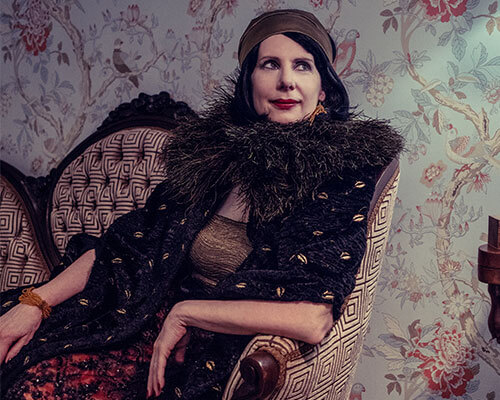 Bernadette Hamilton-Brady has been the Director of Theatre for 25 years, and is currently Chair of the Drama Department. Under her tenure, she has produced, directed, acted, light designed, and choreographed for over forty productions at St. Mary’s University.

Hamilton-Brady has also created and acted in a one-woman show on the life of Polish stage and film actress Pola Negri entitled His Polita. This production was based upon her research gathered from the Pola Negri Collection in the Louis J. Blume Library’s archives as well as other sources. She has also performed the roles of Mrs. Patrick Campbell in Dear Liar, Gertrude in Hamlet and Wife in the bilingual production of August Strindberg’s The Stronger with the International Theatre Festival of San Antonio.

Her course repertoire has included teaching general theatre courses along with Voice and Diction, Acting, Acting for Shakespeare, Auditioning, Theatre History and Ballet. At the heart of her pedagogy is the premise that theatre presents an ongoing experience that enables students to learn about themselves and others in the context of their own creative spirit.

Past Performances and Productions
Her range of productions has included such shows as Rent, Hamlet, The Isle of Dogs, The Fox, The Ice Wolf, Much Ado About Nothing, Lovers: Winners, The Cherry Orchard, Othello, Brecht on Brecht, I Hate Hamlet, Everyman, Miss Julie, The Pirates of Penzance and Side by Side by Sondheim.

Her community work has allowed her to engage in acting and theatre workshops with middle to high school students of such organizations as the Guadalupe Cultural Arts Center and the Edgewood Independent School District. She has also conducted lector workshops for local parishes in the Archdiocese of San Antonio.

Teaching in the 21st Century. “Regenerations: Theatre and Performance as a Regenerative Force”. Association for Theatre in Higher Education Conference. New Orleans, LA. 2007.

To and Between Languages Through Theatre: Techniques for Bridging the Distance Between NativeTongue and a New Language. “Crossing Borders”. Association for Theatre in Higher Education Conference. Toronto, Ontario, Canada. 1999.