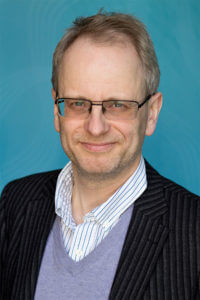 Recent news headlines have explored the possible nomination of President Donald Trump for the Nobel Peace Prize because of his summits with North Korea. Or perhaps Trump could share the honor with North Korea’s Kim Jong-un, other outlets have speculated.

The public is invited to join the St. Mary’s University community in a rare opportunity on Wednesday, March 27, to learn about the process of choosing a Nobel Peace Prize recipient from one of the five members of the committee, Vice Chair Henrik Syse, Ph.D.

Syse will present the free lecture titled, “Who Deserves the Nobel Peace Prize? Challenges and Reflections about the World’s Most Prestigious Award,” at 8 p.m. Wednesday, March 27, in the Moody Life Sciences Center, Room 101.

St. Mary’s Chair in Catholic Philosophy Glenn Hughes, Ph.D., called the event “an extraordinary opportunity to hear and ask questions about the committee’s work, challenges and decision-making.” The interdisciplinary nature of the prize deliberations will lend broad appeal to the discussion, he said.

“The committee’s reflections and evaluations must take into consideration — among other factors — political, economic, sociological, philosophical and theological ramifications of their choice,” said Hughes, who is sponsoring the event along with the St. Mary’s Center for Catholic Studies.

Syse is a Research Professor at the Peace Research Institute Oslo, Professor of Peace and Conflict Studies at Bjørknes University College, and vice chair of the Norwegian Nobel Committee, which awards the prize. He is a philosopher, author, editor, lecturer, and radio and media personality in his home country of Norway. Syse works in several fields, including political theory, the philosophy of religion, the ethics of war and business ethics.

“Dr. Syse’s visit reflects in a distinctive way the goals of the mission of St. Mary’s, which include a concern to educate the whole person for an informed and productive life in a complex and interdisciplinary world,” Hughes said.

For directions, visit the campus map.