Athletics and Recreation
February 05, 2013
Tim Duncan, Gregg Popovich and R.C. Buford: Three names that are synonymous with the San Antonio Spurs’ championship successes. But there’s another name you might not know, that of a St. Mary’s grad who has been there for every one of those title runs. Meet Paul Saenz, D.O., the Spurs’ team physician — the man the Spurs have never won a championship without.

“I think the next-best thing to being the professional athletes themselves is to be part of the medical staff that has the ability to be involved in the maintenance of those athletes,” says Saenz (B.A. ’79) who has been a part of four National Basketball Association (NBA) championship-winning Spurs teams. “That is almost as good as it gets.”

And there are few as good as Saenz.

A San Antonio native who graduated from Central Catholic High School, Saenz received his bachelor’s in Biology from St. Mary’s. He went on to pursue dental school for two years before realizing his true passion was medicine, so he switched paths and received his medical degree at the Texas College of Osteopathic Medicine in Fort Worth.

He founded Sports Medicine Associates of San Antonio in 1992 before joining the Spurs organization during the lockout-abbreviated 1998-1999 season. Since then, the team has gone on to win four NBA titles and post an NBA-record 13 straight seasons of 50-or-more wins.

“You can usually say to yourself, ‘I think I played a role,’ ” said Saenz. “It may have been a small role, but I was involved in this team.”

Saenz happens to be involved with other successful sports programs, too.

In addition, Saenz is in his 19th year as the San Antonio Missions’ team physician, dating all the way back to when the team played its games at St. Mary’s V.J. Keefe Field, and is on the medical staff with San Antonio’s professional hockey and women’s basketball teams. 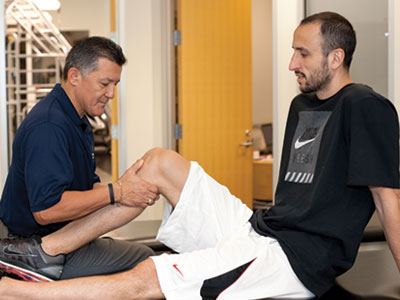 As if his four NBA titles with the Spurs weren’t enough, Saenz has also been part of four Texas League-champion Missions squads. It’s enough to draw some good-natured ribbing from his peers in the medical profession.

“My mentor has been the team physician with the Seattle Mariners for 25 years,” said Saenz of a Mariners team that is one of just two Major League Baseball franchises never to have advanced to the World Series. “He’s always knocking me a little bit when I keep getting these rings.”

But, Saenz admits, “I’m a basketball fan at heart.” And there’s nothing quite like the adrenaline rush created by walking into an opposing team’s arena on game nights.

“When you go into an arena and there are 19,000 people that aren’t rooting for you, you feel like a very, very close-knit group. You get a feel for what the players are up against.”

His passion for the sport dates all the way back to his days at St. Mary’s. Saenz’s time on campus intersected with that of Robert Reid, the St. Mary’s Athletics Hall of Fame basketball player who went on to enjoy a lengthy NBA career. They crossed paths again years later, when Saenz happened to be attending a banquet at which Reid was being honored.

“I did relay to him that I was a big fan of his and was very proud to see how accomplished he was,” Saenz said.

The same could be said for Saenz.

“It’s been a great career,” he said. “I’ve been fortunate to be around teams with winning traditions.”