Alumni
February 05, 2013
In 1900, L. Frank Baum published the children’s novel, The Wonderful Wizard of Oz. In the story, it is revealed that the Wizard isn’t an all-powerful master as others believe; he’s just a man behind a curtain, pulling levers to create an illusion of majesty.

San Antonio has its own wizard in John Santikos who, much like the fabled Wizard of Oz, “provides certain things that people want and satisfies their needs.” Santikos’ motivation for building and operating theatres is that it “makes [people] feel good, stimulates thought, and contributes to an appreciation of something a movie is trying to express.”

Santikos Theatres, an outgrowth of a business that his Greek-immigrant father started in Waco in 1911, is celebrating its centennial. To honor the milestone, Santikos gave  50 scholarships to St. Mary’s freshmen.

Why? Because it was “St. Mary’s that gave me my start,” he said during the scholarship presentation at The Palladium, a Greek-style theatre that pays homage to Santikos’ heritage.

John’s father returned to Greece to marry in 1924. In June 1946, he sent his son to San Antonio to escape Athens, where a civil war followed the World War II German occupation. By boat and train, John made his way to San Antonio where his father had friends. Santikos recalls, “The consensus of opinion was that St. Mary’s was a good boys’ school and that I would be in good company.” The rest of his family— parents and a brother and sister—had joined him in San Antonio by 1949.

Santikos enrolled at St. Mary’s in 1947. He worked hard to learn English (which he knew very little of), and found many helpful teachers. He sought to emulate Brother Paul Goelz, S.M. “I liked the way he talked, his handling of the English language, his ability to articulate things in an interesting way,” he said. Santikos credits Goelz as well as Brothers Anthony Frederick, Joseph Schmitz, and George Kohnen for helping and challenging him.

John Santikos is nothing if not determined. He mastered English and graduated from St. Mary’s within two and a half years, earning a marketing degree in 1949. And he took some life lessons with him. “I learned [the Marianists] were people of good character and good ethics, and that permeated into my being. I have tried to live my life in a very honorable and just and fair way…I was taught that character matters.”

In 1950, John started learning the movie business from the ground up at his father’s new Olmos Theatre. Whether it was taking tickets, working at the concession stand, or booking films, Santikos learned by doing. When his parents decided to return to their native Greece in 1958, he was ready to take over the business, establishing Santikos Theatres.

One hundred years after his father opened a small cinema in Waco, San Antonio’s theatre wizard John Santikos orchestrates the success of his seven major theatres, pulling levers from behind the curtain, shirking the limelight, more interested in fine-tuning all of those small details that make a business successful and giving his patrons what they want. 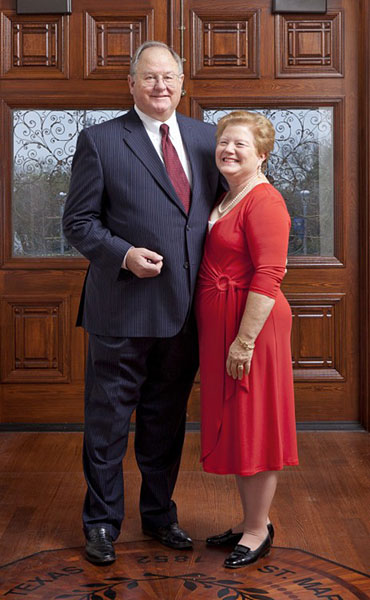 What Does it Take to Become a CEO?

“My undergraduate degree got me the job, but it’s the liberal arts that got me the CEO chair,” said Ed Speed (B.B.A. ’70, M.A. ’86), who completed master’s and post-master’s programs in theology.

Tim Duncan, Gregg Popovich and R.C. Buford: Three names that are synonymous with the San Antonio Spurs’ championship successes. But there’s another name you might not know, that of a St. Mary’s grad who has been there for every one of those title runs.