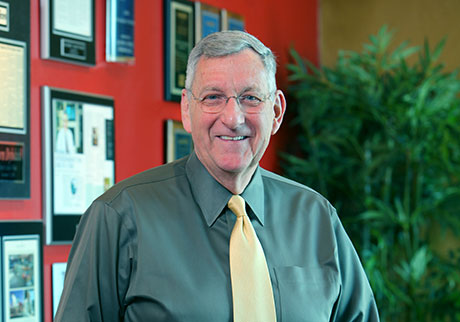 Alumni
January 25, 2013
Bjorn Dybdahl is big in San Antonio, but he’s a giant in the world of consumer electronics.

Dybdahl (B.A. ’70), the founder of Bjorn’s Audio Video, entered the Consumer Electronic Association Hall of Fame in October. Other 2012 inductees include the inventor of satellite radio, the inventor of the computer mouse and HTML, and the founders of Dish Network, LG Corp. and Samsung Electronics. 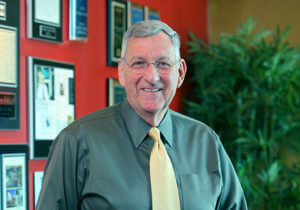 Thomas Edison is a CE Hall of Famer. This is a big deal, folks.

“Being selected was quite a surprise because the people who are in the Hall of Fame … are very well known and have done something very important in electronics,” Dybdahl said. “To choose a small retailer in San Antonio was surprising.”

Dybdahl was one of the first to specialize in home theater systems and custom installation. He helped introduce VCRs, CDs, DVDs and HDTVs to the public, and he takes pride in educating the community about new technology.

Dybdahl was born in Norway, grew up in Minneapolis and came to San Antonio while serving in the Air Force. He started taking night classes at St. Mary’s in the late 1960s while working at Bill Case Sound, a small audio store.

In 1975, he forged ahead on his own, opening Bjorn’s Stereo Designs. The birth of Betamax and VHS that year inspired him to add “video” to his store’s name and eventually expand beyond one employee and 1,000 square feet of retail space.

“Back then, we were one of the first to get involved in big-screen televisions and surround sound. Not because I was brilliant or anything, but just because I enjoyed it,” Dybdahl said.

Today, Bjorn’s Audio Video is a 25,000-square foot showroom on the North Side, and Dybdahl remains active in the business, as well as at St. Mary’s. He’s a member of the Advisory Council of Executives for the Bill Greehey School of Business.

“It’s been fun seeing how the school is growing and making a difference. When I get the opportunity to speak to students I thoroughly enjoy that.”

Professor Keeps to the Shadows While Pushing Students to the Light

Plenty of people can tell you about the work that St. Mary’s University Physics Professor Richard Cardenas, Ph.D., is doing on the campus and in the community.