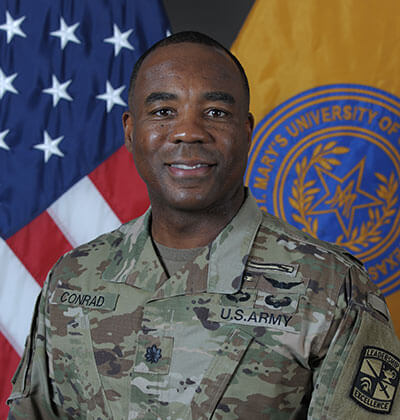 Lt. Col. Steve Conrad enlisted in the Army on August 6, 1990, serving as an infantryman and x-ray technologist. He was awarded the Army’s Green to Gold Scholarship in July 1999 and received a Bachelor of Science in management science in May 2001 from Coppin State University in Baltimore, Maryland. In 2001, he was commissioned as a second lieutenant through Morgan State University’s ROTC program in Baltimore.

His military education includes the Aviation Officer Basic Course, Aviation Captain’s Career Course and the Command and General Staff Officer Course. He also holds a Master of Science in Administration with a concentration in Public Administration from Central Michigan University.

Conrad completed flight school at Fort Rucker, Alabama, in 2002 as a UH-60 pilot. He was assigned to 2nd Battalion, 82nd Aviation Regiment as an assistant S-3 at Fort Bragg, North Carolina. While at Fort Bragg, Conrad deployed to Iraq in support of Operation Iraqi Freedom as an air assault platoon leader and flew more than 150 combat hours. In 2005, Conrad was reassigned to HHC, 2nd Battalion, 82nd Aviation Regiment and served as the sole U.S. Army Liaison to the U.S. Embassy in Nassau, Bahamas, in support of Operation Bahamas, Turks and Caicos, a joint, multi-national, counterdrug operation. In 2007, he serve as a rear detachment battalion commander to the 2nd Battalion, 82nd Aviation Regiment. From 2008 to 2010, Conrad served as company commander of the Warrior Transition Battalion at Fort Bragg.

In 2010, he was assigned as the aviation officer in the Combined Operations and Intelligence Center for Coalition Forces Land Component Command and U.S. Army Central in Kuwait. Following this assignment, Conrad redeployed and PCSed to Fort Rucker to serve as an aviation accident investigator at the U.S. Army Combat Readiness Center and deployed multiple times to Afghanistan. In 2013, he was assigned to the 1st Battalion, 13th Aviation Regiment as the battalion S-3.

Conrad PCSed to the Great Place of Fort Hood, Texas, in 2014. While at Fort Hood, he was assigned as an executive officer for both the 2nd and 3rd Battalions, 227th Aviation Regiment and deployed to Europe in support of Operation Atlantic Resolve. He PCSed to Joint Base San Antonio, Texas, in 2016, and served as the senior personnel management officer for the U.S. Army Physical Evaluation Board. He assumed battalion command of the 1-222 Aviation Regiment at Fort Eustis, Virginia, in 2020. Conrad was selected to serve as a Professor of Military Science at St. Mary’s University and later PCSed back to San Antonio, Texas, in 2022.

Conrad is married to the former Yolanda Johnson and they have three daughters, Nyah, Stevie and Jaime.