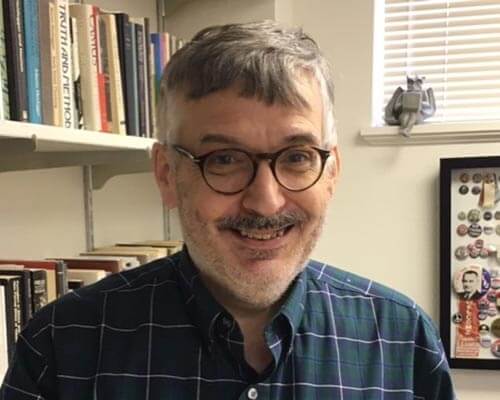 Calogero began his career at St. Mary’s in 1990. He received his doctorate from Loyola University of Chicago in 1994, by defending his dissertation, Meaning and Action: Relating Knowledge and Action in the Thought of St. Thomas Aquinas. He earned his Bachelor’s and Master’s degrees from Boston College, in 1982 and 1985. In between these degrees, he spent 11 months living and volunteering at the Jesuit high school in Belize City, Belize. During his education, Calogero specialized in Neo-Thomism and the thought of Bernard Lonergan. His research in Aquinas, while broad ranging, culminated in a manuscript on Aquinas’s analysis of prudentia or practical wisdom, a topic that connects ethics with metaphysics. He completed his Master’s degree with the financial support of a Lonergan Fellowship and his doctorate with the support of several fellowships, including the Schmitt Fellowship.

While at St. Mary’s, Calogero’s research interests have diversified. He has worked (both with respect to teaching and publications) on the following topics: service-learning and ethical development; Mexican and Latin American thought; the thought of Soren Kierkegaard, Albert Camus, Eric Voegelin and Bernard Lonergan; positivism and nineteenth century thought. In 2007 and 2008, Calogero served as a Texas Campus Compact Faculty Fellow (1 of 5, statewide). In 2005, he received a St. Mary’s University Alumni Faculty Development Grant with funds to support further research on social ethics and service-learning, and in 1999 was awarded the St. Mary’s University Distinguished Service Award for the use and promotion of service-learning pedagogy.

Currently, he is preparing a paper for publication that critiques August Comte’s theory of altruism, is developing class lectures on political economy, and completing further research on the thought of Albert Camus.

“Altruism: A Selfless Act.” In process.

“Who is my Neighbor? Teaching Philosophical Reflection on Service” in Compact Impact: Best Practices Partnerships in the State of Texas, vol. 1 (2009), pp 11-25.

Essay review of Quest for Self-Knowledge: An Essay in Lonergan’s Philosophy by Joseph Flanagan (Toronto: University of Toronto Press, 1997). In Method: Journal of Lonergan Studies, 16 (Spring 1998), 70-77. Also at the Lonergan Website (www.lonergan. on.ca/index.htm).

Essay review of Is There a Universe? The Forwood Lectures for 1992 by Stanley Jaki (Wethersfield Institute, 1993). In the American Catholic Philosophical Quarterly 70 (Spring 1996), 301-305.