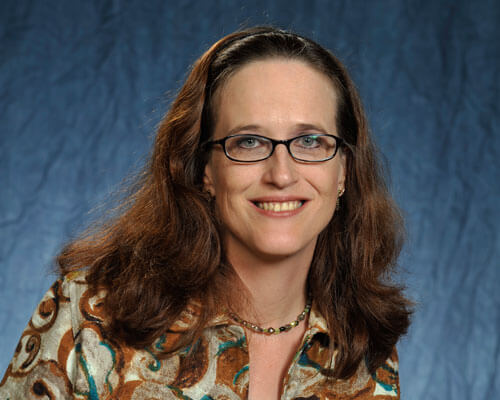 Christine E. Gray, Ph.D., is a molecular geneticist with an interest in mechanisms of gene regulation and development. Much of her research involved the identification and initial characterization of a CTCF-like protein in both Aedes aegypti (the primary vector of both yellow fever and dengue fever) and Anopheles gambiae (the principal vector of malaria). CTCF is a well-known insulator binding protein in vertebrates, and its mosquito homologue may provide a useful means to increase the efficiency of the process used to make transgenic mosquitoes.

Transgenic mosquitoes are made for two key reasons: to learn more about key mosquito genes involved in the natural transmission of pathogens and to potentially create mosquito strains that are unable to transmit pathogens such as viruses, filarial worms and protozoans.

At St. Mary’s, Gray is working with an undergraduate MARC student to assess confirmed CTCF binding sites from Anopheles gambiae for insulator function in a cell culture assay. In a separate project, she is working with several undergraduates on a project to investigate the mechanism for a phenomenon known as cytoplasmic incompatibility (CI) in fruit flies (Drosophila). CI results when specific bacteria (Wolbachia) infect the tissues of insects. These bacteria are then passed very efficiently from mother to offspring, while uninfected females who mate with infected males are essentially sterile.

Gray hopes that greater understanding of this natural phenomenon might enable others to utilize Wolbachia as part of a strategy to reduce the ability of insect vectors of disease to transmit pathogens.

In 2015, she was recognized by the St. Mary’s University Alumni Association by receiving the Distinguished Faculty Award.