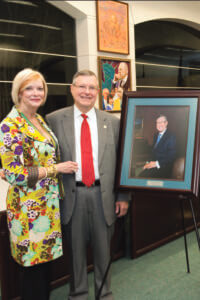 Commencement will begin at 1 p.m. at Bill Greehey Arena, inside the Alumni Athletics & Convocation Center on the St. Mary’s campus. Doors open to the public at noon. Media are welcome to attend.

The ceremony will be streamed live online for family and friends who are unable to attend in person.

Herrmann was the chairman and owner of Columbia 300 Inc. for many years. Columbia was the largest manufacturer of bowling balls in the world for most of this time. He began expanding international sales in the 1970s and organized an export sales division.

He was commissioned in the United States Army Reserve and was the Adjutant General of the Reserve Officers Association of Texas.

Herrmann is currently the honorary chairman of various family-owned businesses.