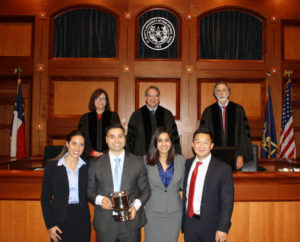 Thomas Pacheco from the University of Maryland was named Best Speaker of the competition.

The Classic, which was held Oct. 13-15, is an invitational mock trial competition for ABA-accredited law schools across the nation. St. Mary’s University in San Antonio, Texas, has hosted it for 16 years.

“Both Loyola, Los Angeles and University of Maryland performed very well,” said Ramona Lampley, Professor at St. Mary’s Law and Director of the Classic. “The competing teams all remarked on the professionalism that has become a hallmark of this competition.”

This year’s mock trial problem was a case in the imaginary state of Lone Star. In the case, an older married couple was found murdered in their home, shot execution style. Evidence linked their nephew, the defendant, to a drug cartel and suggested that the victims were cutting him out of their will due to his drug cartel connections. The victims were cooperating with the police in the police investigation of the nephew. Professor of Law David Schlueter wrote the problem that was the basis of the trial.

Three preliminary rounds were held at the Bexar County Courthouse and the Bexar County Justice Center. Four teams – Loyola, Maryland, South Carolina and Chicago-Kent – advanced to the semifinals in the Law Classrooms Building on the St. Mary’s campus. The final round was held in the law school’s high-tech courtroom.

An awards dinner was held after the preliminary rounds:

The Lone Star Classic Committee was composed of Lampley; Assistant Directors Austin Griffith, who is Chair of St. Mary’s School of Law’s Board of Advocates, and Margaret Rodgers; and committee members Tiffany Lee and Brian Smith.