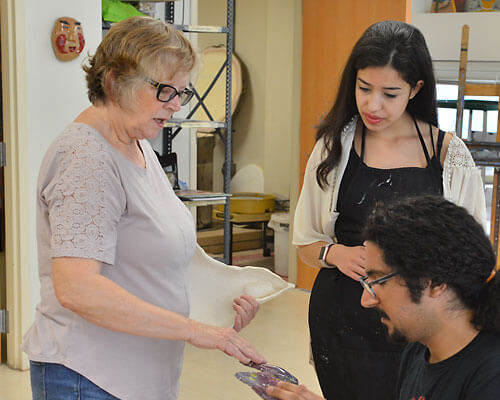 Twyla Arthur moved to the San Francisco Bay Area as a young adult after growing up in a small town near Tulsa, Oklahoma. It was living in the Bay Area that inspired her to continue her studies in painting and sculpture. In fact, it was a specific exhibit of paintings by Paul Klee at the University Art Museum in Berkeley that showed her a path for pursuing her work. She completed her MFA in sculpture at Mills College in Oakland, California where she studied with well known west coast artists: John Roloff, J. DeFeo, Ron Nagel and Katherine Wagner.

It was in the Bay Area she began her career in public art completing mosaic tile projects for the city of Dublin, California, the University of California at Berkeley and the Bank of America in San Francisco. She worked extensively with David Baker architects including working on David Baker’s personal house which has been published in several books and periodicals including Inside Architecture by Susan Zevon, West Coast Wave by Dirk Sutro, Sunset Magazine, Brava Casa magazine. Her own work was highlighted in The Art of Mosaic Design by JoAnn Loctov and Leslie Plummer Claggett and has been included in several other books on mosaic design.

Twyla Arthur moved to San Antonio, Texas several years ago. She has continued her work in public art and has completed a number of projects for the cities of San Antonio and Austin.