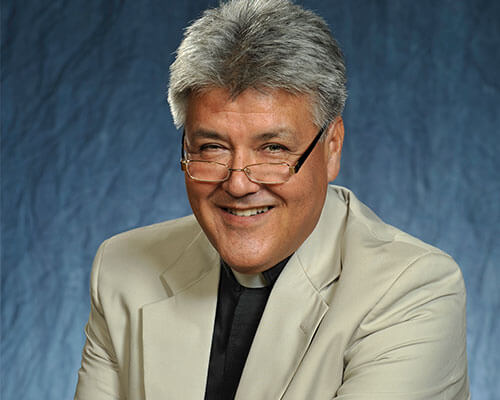 Vela, a 1976 graduate of St. Mary’s, has been an Assistant Professor of Theology and Director of the Study Abroad Program in Spain, and served on the Core Curriculum Review Committee, Strategic Initiatives in International Education Committee and the President’s Peace Commission.

He has served on numerous boards, including the U.S. Catholic Conference of Bishops Commission on Certification and Accreditation, U.S. Academy of Catholic Hispanic Theologians, and our Board of Trustees, and presently a Trustee at the University of Dayton. Vela has published extensively on the importance of mission.

While Vice President for Mission and Rector, he focused on expanding and enhancing programs that foster and promote the University’s Catholic identity and Marianist charism, and under his leadership the Catholic Intellectual Tradition Lecture Series has become one of St. Mary’s signature lecture series.

Vela led ongoing formation programs for the University, including its Board of Trustees, and has engaged more students in their faith by adding multiple sites for worship opportunities.

He supervised the renovations of Assumption Chapel, making space a more inviting place of reverence for all people, and restoring its significance as a center of spirituality and community on campus. In addition, he has worked with Trustees, faculty, staff, students, Marianists and local community leaders to ensure the Catholic and Marianist character of St. Mary’s.

Vela participated in a Biblical Archeology Program in Israel in Fall 2015, based out of Jerusalem and sponsored by the Catholic Theological Union of Chicago. During Spring 2016, he participated at the Jesuit School of Theology’s New Horizons Sabbatical Program in Berkeley, California.