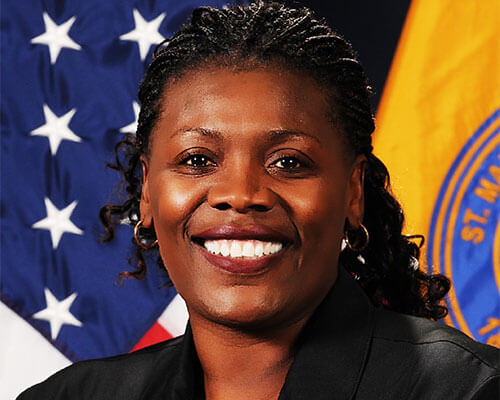 Lynette McDuffie was born in St. Louis, Missouri. After enlisting in the U.S. Navy Delayed Entry Program, she reported to Basic Training at Recruit Training Center, Orlando, Florida in Aug. 1990.

Upon graduation, she attended Signalman “A” School also in Orlando. In May 1999, McDuffie attended Legalman “A” School and became a Navy paralegal after nine weeks of training. She has served in multiple duty stations to include Pearl Harbor, Hawaii, Recruit Training Command, Great Lakes, Illinois, and Manama, Bahrain. She also served onboard four ships to include the USS Safeguard (ARS-50), USS Acadia (AD-42), USS Cape Cod (AD-43) and USS Bonhomme Richard (LHD-6).

McDuffie reached the rank of Chief Petty Officer in 2007 and ultimately retired from Commander, Navy Reserve Forces Command in Norfolk, Virginia in 2013. McDuffie and her husband moved to San Antonio upon her husband’s retirement after 30 years of service in 2016.

Prior to her current position, McDuffie worked for the Department of the Air Force at Defense Language Institute English Language Center (DLI) as an Administrative Assistant. McDuffie began her duties at St. Mary’s University as the Human Resource Assistant on in 2018. McDuffie has a B.S. in Paralegal Studies and an M.A. in Human Resources Development.

McDuffie resides in San Antonio with her husband Anthony, three of their 14 grandchildren and their dog Koko. The family has eight children. McDuffie loves to read and travel. She also loves to assist young people with career goals.