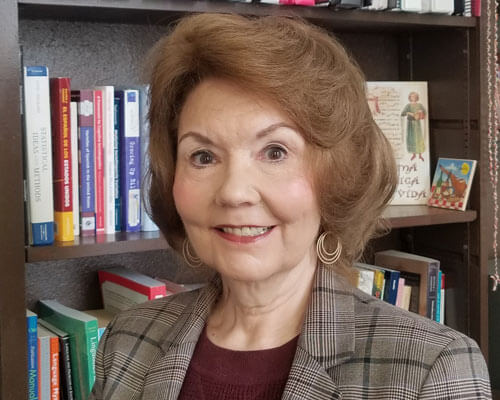 Julia Elaine Bryant’s focus in teaching French is on communication and culture so that her students can function in real-life situations in a Francophone country. The structural objective in the elementary classes is to narrate in the past, present and future. The intermediate students will begin to support opinions, hypothesize, research and make presentations based on the local culture of a specific geographical area and on social justice issues.

Bryant has traveled yearly to France since 1989, including to Paris, the Loire Valley, Reims, Amiens, Provence, Cannes, Nice, Savoie and the Strasbourg/Colmar area. From 1992 to 2000, she was a proficiency tester at UTSA for DELF, administering the four levels in addition to interviewing and evaluating candidates. From 1996 to 1997, Bryant was president of the Central Texas American Association of the Teachers of French (AATF). From 1981 to 2004, she was an instructor of International Baccalaureate, French Language B. In 1999, she was appointed to the IB Grade Award Session in Cardiff, U.K., where she scored student essays in French from countries worldwide.

At Southern Methodist University in 2000, Professor Bryant presented on the pedagogical implications of the IB Grade Award in Cardiff and, in 2004, was appointed to the State Panel for French Textbook Review and Selection. From 2006 to 2009, she served as a TOPT scorer, verifying performance analysis of the speaking skills of prospective secondary teachers of French in Texas.