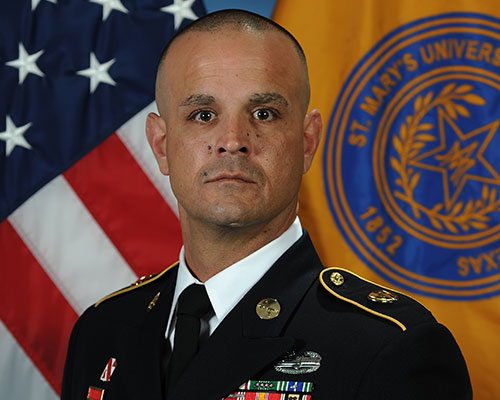 Afterwards, he was deployed with Alpha Battery, 3rd Battalion, 13 FAR from 2008 to 2009 as 31E and 31B as Military Police section chief for detainee operation at Camp Bucca, Iraq. He was then assigned 2nd Battalion, 20th FAR, as Platoon Sergeant for a MLRS Platoon, from 2009 to 2012. Ramirez later was assigned to the 17th Fires Brigade where he served as the Brigade Master Gunner from 2012 to 2015, then to the HHB, 2nd Battalion, 20th FAR in Fort Sill as 1st Sgt. from 2015 to 2018. Ramirez is currently serving as the Senior Military Instructor for St. Mary’s University.

Ramirez is married to Michelle Nicole McCain of Des Moines, Iowa. They have a two-year-old daughter, Isabelle Marie.

Ramirez is also the recipient of the Prestigious Sergeant Audie Murphy Medallion and the Order of Saint Barbara Award.