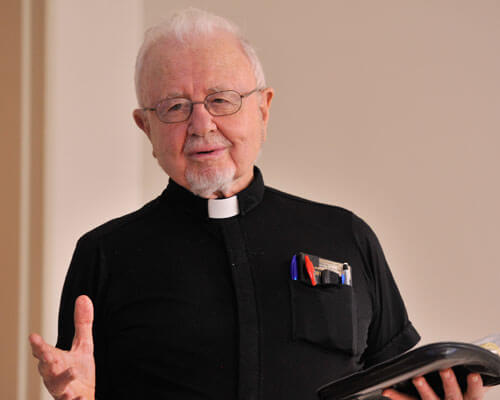 Author of over twenty books on both the scholarly and popular level, Father Montague has specialized in the Pneumatology of both Old and New Testaments, having written or contributed to a number of studies in that discipline. He has also researched and written in the field of Biblical Interpretation (Hermeneutics), and in the Marian theology in the Gospel of John. Having done his doctorate in Paul, he is especially interested in Paul’s theology of spiritual growth. He did a summer study in Israel with Hebrew Union College and participated in the excavation of Tel Gezer in 1966 under William Dever, Ph.D.

The courses he teaches are about the New Testament deal with values that he believes are important to life and raise the question of faith as the source of a full human life. Prior to teaching at St. Mary’s University, he was a professed Marianist and also taught at a high school for six years. When he’s not teaching, Father Montague enjoys playing the guitar and birding. Throughout his career, he has presented lectures in six different continents.

LIVING IN THE FATHER’S EMBRACE: EXPERIENCING THE LOVE AT THE HEART OF THE TRINITY (Ijamsville, MD: The Word Among Us Press, 2014. $11.95

HOLY SPIRIT, MAKE YOUR HOME IN ME: BIBLICAL MEDITATIONS ON RECEIVING THE GIFT OF THE SPIRIT (Ijamsville, MD: The Word Among Us Press, 2008)

THE VISION OF THE BELOVED DISCIPLE: MEETING JESUS IN THE GOSPEL OF JOHN (Staten Island: Alba House, 2000; available now only from Fr. Montague).

OUR FATHER, OUR MOTHER: MARY AND THE FACES OF GOD (Steubenville, OH: Franciscan University Press, 1990) OP

THE SPIRIT AND HIS GIFTS: THE BIBLICAL BACKGROUND OF SPIRIT-BAPTISM, TONGUE-SPEAKING AND PROPHECY (New York, Paulist, 1974) OP