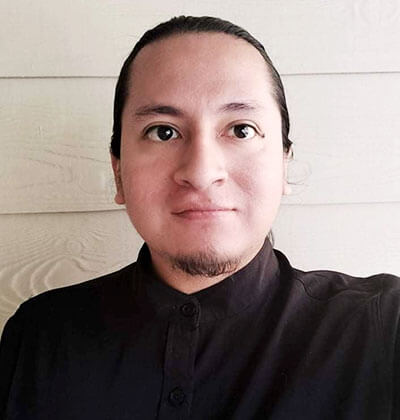 Christian Elguera, Ph.D., is a Visiting Assistant Professor of Spanish at St. Mary’s University. His research is concerned with the production and circulation of cultural translations by and about Amerindian peoples from the 16th century to present in Abiayala, particularly in Andean and Amazonian areas. His first book-manuscript, Traducciones territoriales: defensoras y defensores de tierras indígenas en Perú y Brasil (1960-2000), analyzes poems, chronicles, radio programs and paintings enacted by Quechua, Munduruku, Yanomami and Ticuna subjects in order to defy the dispossessions, extermination, and environmental destruction promoted by the Peruvian and Brazilian States. In this investigation, he considers translation as a linguistic tool that serves to produce networks between Quechua, Portuguese, English and Spanish speakers.

As an instructor, Elguera’s principal goal is to activate his students’ critical thinking skills. Every student has specific needs in a foreign language and culture class; each one interacts with the class materials and topics according to their interests and backgrounds in global cultures. He has tackled this issue by facilitating lively discussions in which everyone is encouraged and given the opportunity to participate, as a means to make students realize the importance of contributions in learning. His teaching methodology thus involves stimulating as well as guiding students’ participation in class, combined with giving them punctual lectures and explanations that clarify their specific doubts or questions.

As of 2020, Elguera works as an Indigenous Literature correspondent for Latin American Literature Today (LALT), a magazine sponsored by The University of Oklahoma. Considering his expertise in Indigenous Studies, his principal role has been to invite Amerindian writers to publish their works in LALT. His duties also involve translating literary pieces from Portuguese to Spanish, and from Quechua to English.

“Warmipa qapariynin = Cries of a woman” by Gloria Cáceres Varga. Latin American Literature Today, no. 20, 2021. Translation from Quechua to English.

“Retomada/Retomar/Recovering” by Julie Dorrico. Latin American Literature Today, no. 18, 2021. Translation from Portuguese to Spanish and English.