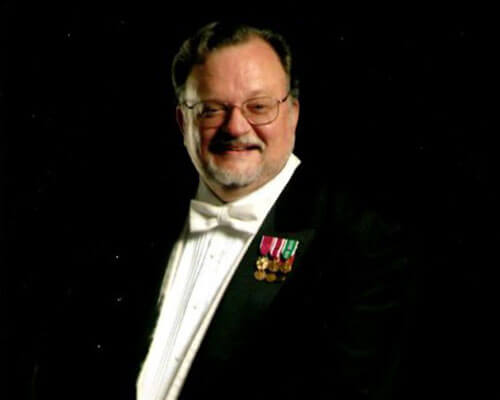 Charles L. Booker Jr., a native of Natchez, Mississippi, is a retired U.S. Army Bandmaster and former Associate Professor at the University of Arkansas – Fort Smith. He served the university as Director of Jazz Studies, Director of Bands and Chair of the Music Department. During his tenure at University of Arkansas – Fort Smith he taught trumpet, band, jazz band, conducting, music theory, orchestration and composition.

He was Interim Director of Bands at Trinity University from 1996 to 1997 and assistant editor at Southern Music Company from 1994 to 1997.

In 2007, the New Mexico State University Symphonic Winds released their CD entitled “Centra-fuge: The Music of Charles L. Booker, Jr.,” and in 2008, Booker released his second CD “American Jubilee.” Booker’s CD “Time Remembered” was released in 2009, and his CD “Radiant Blues” was released in 2011. In 2013, Booker and fellow composer Roger Cichy released a compilation of their latest original music on their CD “Glorious Journey.” More information on Booker and his music can be found on his website, www.charlesbooker.com.

Booker has been recognized by the Mayor of Fort Smith (the 2006 “Mayor’s Honors to the Visual and performing Arts”), the North Side Independent School District of San Antonio (the 2008 “Pillars of Character Award”), and received the Arkansas Arts Council Award in music composition for 2009.