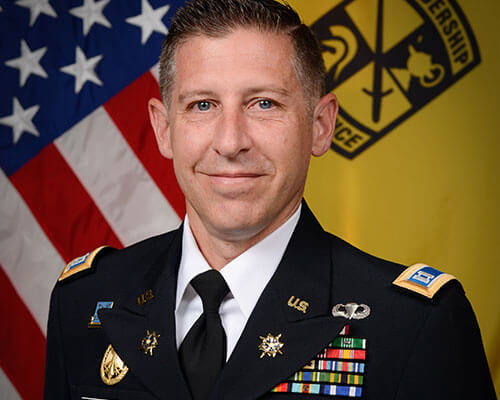 CPT Bradley W. Glosser is a 35D Military Intelligence Officer. He is originally from Pacifica, California and graduated with a Bachelor of Arts in English Literature from the University of California at Santa Barbara in 1999.

Glosser attended the Officer’s Candidate School at Fort Benning, Georgia and was commissioned as a Second Lieutenant to the Military Intelligence Branch in 2008. His first officer assignment was with the 12th Combat Aviation Brigade, Katterbach, Germany, where he served as the brigade assistant S-2 and deployed to Iraq in support of OIF 09-11.

In 2012 Glosser attended the MI Captain Career Course (MICCC) and the HUMINT Officer Course at Ft. Huachuca, AZ, where he was awarded a secondary MOS as a 35F – HUMINT Officer. From September 2012 to September 2013, he was assigned as the S-2 for the 94th Military Police Battalion, USAG Humphreys, Republic of Korea. In September 2013, Glosser arrived to U.S. ARNORTH, Fort Sam Houston where he served in G2 Plans from September 2013 to February 2014, Operations Company Commander from February 2014 to January 2015, and Headquarters Support Company Commander from February 2015 to June 2016. From July 2016 to June 2018, he returned to the Republic of Korea where he served as a Targeting Officer for the Combined Joint Fires Element, United States Forces Korea.

Glosser is currently the Executive Officer and Assistant Professor of Military Science at St. Mary’s University. Glosser is married to the former Andrea Dixon of Atlanta, Georgia. Glosser and Andrea are extremely proud parents of their talented twins Theone and Maximus and their youngest child Jaxon.