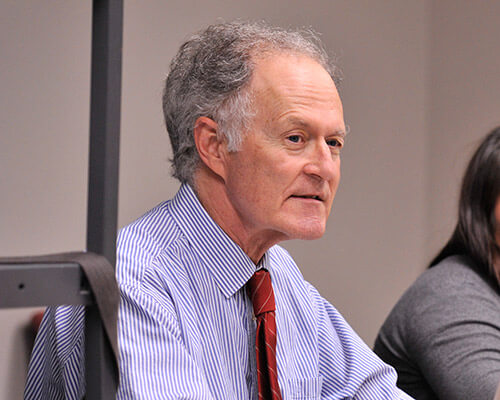 Bill Israel, Ph.D., is Associate Dean of the College of Arts, Humanities and Social Science and Associate Professor of Communication Studies at St. Mary’s University. His research focuses on the study of media and power. He wrote A Nation Seized after teaching with Karl Rove.

Israel began his career in Iowa, as a reporter for newspapers, radio, and television. He specialized in political reporting, while he completed a bachelor’s degree in political science at the University of Iowa, Iowa City.

To improve his reporting, he took a position as press secretary to a candidate for governor, then became press secretary to U.S. Senator Harold Hughes, during Watergate. Israel supported Hughes’ Senate Armed Services subcommittee investigations of the secret Cambodia bombings, part of the debate to impeach President Richard Nixon, before Nixon resigned.

As Hughes left the Senate, Israel accepted a Rotary Foundation Fellowship to study at the University of Strasbourg, France. After a year in Europe, he moved to northern California, where he worked as reporter, editor, photojournalist or anchor for news organizations including McClatchy Newspapers, San Francisco Chronicle, the San Francisco Examiner, Oakland Tribune, Dallas Morning News, USA Today, The New York Times, CBS Radio, ABC-TV, and others. He also worked as a public relations officer in hospital, university, and information technology start-up settings. Before returning to graduate school, he served as press secretary to California Senate Majority Leader Barry Keene.

As a journalist, Israel found mainstream journalism marginalizing the views of political minorities of all types. To study that issue, he completed a master’s (1994) and a Ph.D. (1999) in journalism and political communication at the University of Texas at Austin, while teaching young reporters and introducing minority students to journalism. His last assignment at UT was to teach Politics and the Press with political operative Karl Rove, while Rove ran then-Governor George W. Bush for the presidency. A Nation Seized: How Karl Rove and the Political Right Stole Reality, Beginning with the News connects what Rove taught to the rise of the political Right, its development of a more potent propaganda, and the impact on journalism.

After graduate school, Israel taught at the University of Massachusetts-Amherst. He received the UMass system President’s Public Service Award for developing an innovative information technology program.

At St. Mary’s University, Israel teaches at the intersection of journalism and politics.

A Nation Seized: How Karl Rove and the political right stole reality, beginning with the news, Spokane, WA: Marquette Books, 2011